When Your Phone Becomes a Book

I'm not usually an early adopter with things. I think this was a hard learnt lesson from the 80s when video first came out. Beta or VHS? I had no idea, took the wrong advice and got a Beta machine that was next to useless very quickly.

As such I haven't got an e-reader despite the obvious pull and my increasing curiosity. Recently I wanted to read Carlo Collodi's original version of Pinocchio. My local library didn't have it. None of the local shops. Sure I could have ordered it either at a shop, or from Book Depository or Amazon. I could download it and read it for free on the laptop, but I've never done that either for a whole book, and am still not keen to do that for some reason. So I decided to check out itunes (not a frequent destination for me either). There it was for $1.19. Tempting. Too tempting to resist. And within minutes it was on my iphone. 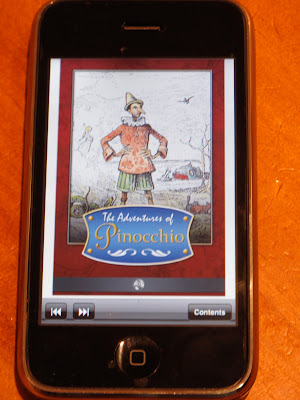 So I started reading. It wasn't as bad an experience as I thought it would be, but there were some annoyances not encountered in books along the way. Page turning may not necessarily be as precise a science as you are used to.

And because the reception in our house is so awful every few minutes I would get that annoying notification that my network is lost. And despite how frequently this happened and how long that annoying little popup was there blocking my reading- do you think it would stay long enough to take a photo? Oh no.

Lying in bed (a traditional posture for readers) if you were careless for a second the phone would flip the page sideways. Books don't do that.

But I did sort of like the contrast of reading what is such a classic, old story in such a modern way.

And what of the story? Well, everyone knows the basics. Pinocchio is indeed a marionette who longs to be a real boy. In the book Pinocchio isn't all that likeable a main character actually- he sends his father Gepetto to gaol early on, and kills the Talking Cricket (not ever called Jiminy BTW) by throwing a hammer at him.

Pinocchio is very much a product of it's time and place. Written to instruct children on proper behaviours, it is essentially a primer on the proper behaviour of children, particularly boys. It does all get hammered home a bit:

Laziness is a serious illness.

Lying is the worst habit a boy can have.

No-one can find happiness without work.

Dreadful things happen due to disobedience.

Boys who don't listen to their elders come to grief.

Pinocchio actually struck me as much more pious and sanctimonious than Heidi, which whilst it had a more overt religious presence, there was much more an empathic caring than a strictly defined set of rigid behavioural rules.

There were some great imaginative touches and descriptive passages though- it wasn't all completely dry. A crab is described as having a voice that sounded like a trombone with a cold, which whilst a preposterous descriptor at one level, it also makes an intuitive sense, and I can totally hear what that voice would sound like.

I also like the glimpse into the past, and Pinocchio has lessons to teach us about poverty as well as piety. Clearly a lot of Collodi's child readers would have been used to meagre meals and hunger. Pinocchio is foolish with money, and doesn't usually have enough to eat. Gepetto tells him that hunger makes the best sauce. When Pinocchio is preparing for his party in anticipation of becoming a real boy- he plans 200 cups of coffe and milk, to be served with toast buttered on both sides. The fairy bread of the day?

Pinocchio is the 152nd book of the 1001 Children's Books I'm planning on reading before I grow up
Posted by Louise at 23:14

I am fascinated by your 1001 children's books venture and will be checking in to see "what you are finding" -- I have already marked a few to read myself.

One of my sisters was a kiddie-lit major and when my girls were young I read like a mad-woman to find the best books for them. Thankfully, they are both voracious readers now and we share books and book-lists.

Thanks for commenting on my blog!