Recently I came across a great list of 25 Classic Australian Kids Books. Most are very well known, but a few were completely knew to me. One of the new to me titles was Sister Madge's Book of Nuns. I've been keeping my eye on Doug MacLeod for a while now, ever since I saw him speak at the Melbourne Writers Festival in 2012. But I've only managed to read a picture book or two of his. He's one of those writers that I fully expect to love, I just need to find time to read more of his work. 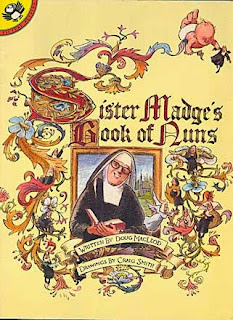 So I couldn't go past Sister Madge's Book of Nuns- the title alone is proof enough that you can write a picture about pretty much anything. Indeed it is a book of nuns. But unlike any other book of nuns you may have come across before. Irreverent was possibly coined as a term to describe this book.

Written in verse, Sister Madge tells us about 10 of the nuns inhabiting Our Lady of Immense Proportions. These are no ordinary nuns. Murderous, bossy, bikie gang nuns, hoarders of Women's Weeklies.

Sister Laurel, rough and tough
Was very fond of taking snuff
I wonder if you've ever seen
The sort of substance that I mean?

It's powdery and black like soot
And up your nose is where it's put
Your nostrils twitch, they start to ache
You sneeze til your suspenders break.


The verses are full of great things loved by children- bursting nappies, burping babies, antlers growing out of nunly heads. And quite a number of things seem to end up noses.

The manager who'd been so rude
Was knocked into the frozen food
And there he lay in cold repose
With two fish-fingers up his nose.


Doug MacLeod has a rather hilarious account of the genesis of Sister Madge's Book of Nuns at his website. Is it true? Possibly. Probably. I certainly hope so.
Posted by Louise at 11:18