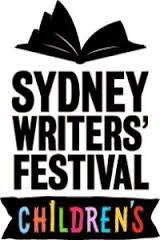 I had a fabulous day at the Sydney Writers Festival Secondary Day this week. There was a great lineup of 4 authors, and I was very keen to go after a similarly fabulous day last year (but I never got to telling you about that). I wasn't familiar with all of the authors, but got to reading at least one book from three of the four before the day.

Laurie Halse Anderson was first up and she fairly exploded onto the stage. She gave such a high energy presentation the audience of high school students were silent, completely captivated, she held them entranced by her words and her passion. It was honest, true, funny and moving. She spoke to each of them, and so many of them queued to buy her books and get them signed afterwards. It's always great seeing new books fall into the hands of children, and I may have been a little merchandised myself.

Laurie had several important messages for her teenage audience. Mostly importantly that we have all survived something and everyone has a story to tell. She talked of her own childhood, disrupted by her father returning from World War II a damaged man. Like many returned soldiers he turned to drink, and this caused problems within the family- they lost their home, and the frequent moves naturally meant frequent changes of school for young Laurie. Laurie feels that she was kept alive by reading, even though she had difficulty learning to read in the first place. She didn't of course like the dreary stuff that was assigned in her English classes (who did?), and she rightly believes that teenagers don't like to read things that suck. Just as a point of interest, adults don't either. Laurie was then "saved" by an exchange year spent on a Danish pig farm where her teenage vegetarian self learnt to eat meat.

A library is a hospital for the mind. Anonymous.


Laurie has a great sense of adolescence, which really informs her writing. "It's weird, smelly and awkward for everybody, and it's worse if weird stuff is going on in your family". Laurie's first book success was the amazing Speak, published in 1999- a book that I read quite a few years ago, so long ago it was pre-blogging, so while I have some memories of reading it, they're not particularly detailed memories anymore. Speak tells a powerful tale about the rape of a young girl, and is widely taught in American schools. Laurie has spoken to thousands of kids about this book, and she was struck by how many boys could not understand how the girl would be so devastated for so long.

She then spoke specifically to many boys and learnt three things. Boys were generally confused about girls. Many boys had to deal with bullying, and many were sad because they don't have a relationship with either their own father, or a father figure. Her fourth book Twisted was written from a male point of view.

Her latest book, and my current read, is The Impossible Knife of Memory, a story born out of her father's experiences with PTSD after WWII, and also those of her nephew who is a recent veteran. "When your parent can't be your parent, that's about as bad as it gets". The Impossible Knife of Memory took a year to write, working 50 hours per week. Laurie's historical fiction takes longer to write as it requires lots of research.

Laurie talked about her writing process. She will often think about a story for a few years before she writes it. She writes well about things that make her angry. She never planned to write a story about eating disorders, but her readers were asking her for one. Still she didn't plan to write about it until she discovered that eating disorders have the highest mortality rate of any psychiatric condition. Her book Wintergirls came from those thoughts.

1. Putting off your writing to the last minute. Emotions then hijack your cortex and you can't think straight.
2. We all sit down too much, and don't move. Moving helps.
3. Stop trying to be perfect. "Noone writes a great first draft". Fear of not writing perfectly can create writers block.

I can't overstate how much I loved this session, it was my favourite of the day. It was almost therapy at times.

Everyone has to deal with sad stuff. We have little control over what happens to us, but we have almost complete control over how we react. Some young people will turn to drugs and alcohol to mute their pain as many adults do, but this will really only create more problems.

These are powerful messages for young (and not so young) people to hear. If you get a chance to see Laurie Halse Anderson in person you should do it. She's amazing. If not you can still read her books.
Posted by Louise at 23:05