I almost read this Sydney Morning Herald article on time. Well, pretty close for me. I actually found it the weekend that it was printed. Andy Griffiths is of course one of our most popular Australian writers writing for children. I've seen him speak at several writers festivals and he always has tremendous queues of kids eager to meet him and have him sign the huge stack of his books that they've brought with them. Certainly they were in Melbourne in 2012, and he was the best selling author at the Sydney Writer's Festival just last week. He spent seven hours signing books for kids!

Andy writes in a comedic style, and obviously sees humour as an important, as did Roald Dahl. According to the article Road Dahl once wrote that the four ingredients of children's fiction were suspense, action, eccentricity and magic. Plots with ghosts were good, and so were those with chocolates, toys, treasure or money. Children, he wrote, loved to be spooked and "made to giggle". Read Roald Dahl's full advice here.

The books and authors Andy Griffiths suggests are keeping the Dahl legacy alive: 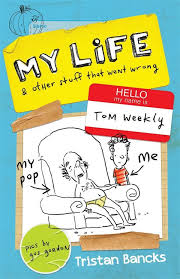 Horribles Histories - Terry Deary (some not all of course there's so many, see my reviews)

Captain Underpants - Dav Pilkey (quite a few, but still not all) 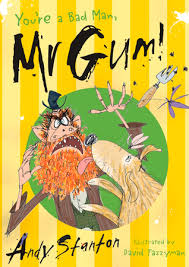 Demon Dentist - David Walliams (wouldn't you know it? The only Walliams I haven't read! But you can read all my other gushing Walliams reviews) July 2015-  I've read it now! (see my review)

The descriptor in the article about You're a Bad Man, Mr Gum! sounds fantastic. It's so good to live now, so that even if a book isn't published in Australia (and why would that be?), you can get your hands on it very quickly online. It will be mine, oh yes it will be mine.
Posted by Louise at 09:47