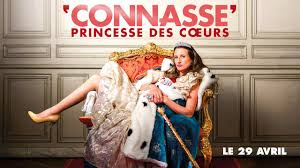 Prince Harry has just spent the last month or so in Australia and New Zealand. He has been in the news a lot. Initially he was here for Army exercises, and then more holiday making. The pressure is really off Harry now. Fifth in line to the throne. He rubbed noses. He went to a pub trivia night. He charmed babies. He's been a bit everywhere. He even said he wanted to get married and have kids. Right now. The girls went wild.

So I was rather amused to see this article proclaiming Harry as the "unwitting star" of a new French comedy. I hadn't heard of Camille Cottin before, but it seems she is a French comedian and actress with a recent sketch comedy show called Connasse. In her feature film Camille decides she is sick of ordinary life and she decides to marry "the last bachelor prince who is not deformed (even if he is a redhead) and who is the right age: Prince Harry."

The format seems a bit Borat with hidden camera and real people, but there is enough Paris scenery and Cross Chanel rivalry that it looks a must watch.

I can't wait to watch Connasse: Princesse des Coeurs. I'm not sure when it will be available. It was released in France on April 29. Sadly I'm not in France. I can't find it on iTunes, and there doesn't seem to be any other international release dates as yet.

Labels: at the movies, Dreaming of France

It sounds like it could a bit of light fun - maybe one to add to our list of French movies to watch with me stepson studying French for the HSC?

It does look fun Brona, and I'm sure teenagers would like it too. I suspect I'll be watching it with Master Wicker at some stage.

This sounds like a fun movie. It made me laugh, but feel bad for Grace who is in London now and hoped she might run into Prince Harry. Thanks for playing along with Dreaming of France. Here’s my Dreaming of France meme

Help! I need subtitles; but even so it looks quite hilarious!