The Ghost of Thomas Kempe 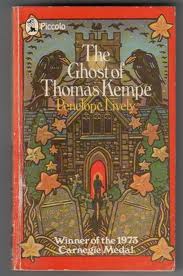 I really enjoyed The Ghost of Thomas Kempe even though I wasn't expecting to. I let a daggy old mid 1970s cover put me off I guess ... I should have known better. Penelope Lively is known as both a writer for adults and children. I've read her most famous adult book Moon Tiger, and remember liking it but not much more than that.

The Ghost of Thomas Kempe is indeed a ghost story- perhaps the subject matter put me off a little too? I kind of outgrew ghost stories a few decades ago. But this is a delightful, well written ghost story with a delightful English village setting with marvellous village characters.

Ten year old James Harrison and his family have just moved to Ledsham in Oxfordshire, and into an old house.

It was a very old place, half way between a village and a small town, and had, somehow, the air of being dwarfed by the present. New housing estates were mushrooming now on two sides of it, but the centre remained as it must always have been with the houses and streets a size smaller than the houses and streets of a modern town.


James' parents have converted the disused, locked attic into a bedroom for young James. And this is where the trouble starts. There is a wonderful sense of spookiness and foreboding from the start.

In the room, there was a gathering of air: it bunched and compressed into little winds that nosed the mounds of wallpaper, rustled them, and set the windows faintly rattling. Then it subsided, and the room was quiet: empty.


But The Ghost of Thomas Kempe has much more substance than a mere ghost story. It is a wonderful contemplation of family, community, time and memory. James has just moved to a new town, he doesn't always get along with his sister, his mother makes cauliflower cheese for dinner and he is forever getting into trouble and despairs of ever receiving dessert or pocket money again. And apparently it's quite difficult to get anyone to believe that your house and village are inhabited by a note writing poltergeist.

'If you think I've made it all up,' said James icily, 'you've got another think coming. Who wants all their pocket money stopped and no pudding and everybody getting in a bad temper with you?'


Penelope Lively is a wonderful writer. While on the face of it she seems a most English of writers, she was born in Egypt to English expat parents and did not attend any sort of school until she was 12. The Ghost of Thomas Kempe was her first big success. It won the Carnegie Medal in 1973.

Thank you for reminder of Penelope Lively'
I prefer original covers, when gifting..