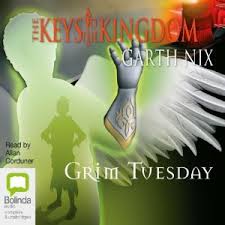 Grim Tuesday is the second rather amazing fantasy story in Garth Nix's The Keys of the Kingdom series that started with Mister Monday (see my review). I really enjoyed the imaginative tale of Mister Monday and somewhat unusually for me embarked on my own quest to listen to the rest of the series.

Garth Nix has once again created a highly imaginative story. It is similar in some ways to Mister Monday of course, there is Arthur, the second part of the Will, and the second set of keys, but Grim Tuesday's domain is another part of The House entirely and rather different to the Lower House of Mister Monday. Grim Tuesday's domain is the Far Reaches, a type of mine fired by his greed. Garth Nix is tremendous at creating monsters- my favourite this time is Grim Tuesday's disembodied eyebrow that has taken on a life of its own! But using Nothing as a threat is impressive too.

Rather unusually I thought Grim Tuesday himself doesn't enter the story until quite near the end, at the end of the 5th of the 6 audio CDs. He is of course a malevolent threat up until them, but we don't actually meet him until quite late in the story.

My library has the first three books of The Keys to the Kingdom available on audiobook, I will certainly continue on, and hope to listen to all of these wonderful, imaginative, complex stories.

I love audiobooks, but, with a five minute commute each day, it takes approximately 2.3 years to get through a big book.

Maybe you can keep giving updates here on the rest of the series?

I only have a 15 minute commute Deb (actually it's probably a bit less), but can still get through one of these reasonably quickly- this one was only 6 discs- although I think I listened to some on a trip to Sydney too. Actually I really started listening to audiobooks when my commute went from 4 minutes to 14! I don't listen to them all the time, as often I listen to work podcasts, but they do make a lovely change. Generally I find it easier to listen to non-fiction audiobooks, but I'm loving this series. Perhaps I'm growing into fantasy? I'll certainly keep you updated with the rest. It will be a big achievement for me if I get through it.

I read this series with my son a couple years back. I enjoyed it, but I think he liked it more. I found some of it a little hard to follow- but he had no trouble at all. I think it just means I have to read more fantasy.

Susan, I found this one a bit hard to follow at times too, a problem I didn't have with Mister Monday. I'm not a great reader of fantasy either (although have been expanding my horizons a bit lately) but am enjoying dabbling my toes in the genre. I'm still looking forward to Drowned Wednesday and the rest of the series.