I've been keen to see the Forgotten Songs artwork for some time now. This week I had my chance, and I wasn't disappointed.

Forgotten Songs was initially a temporary laneway artwork program in Sydney in 2009-2010. Thankfully it wasn't lost to us and was recommissioned as part of an upgrade to Angel Place in 2012.

Forgotten Songs commemorates 50 bird species once heard in central Sydney before European settlement. These birds disappeared from the area as Sydney developed.

During the day the songs of these missing birds ring out above your head from their empty cages. 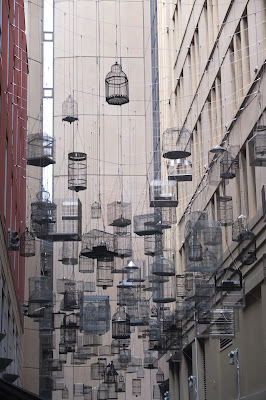 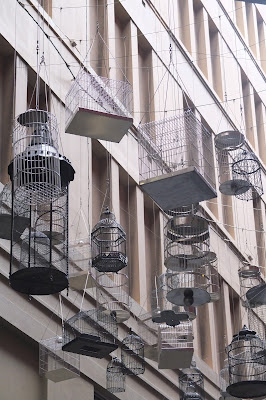 As we went to a concert that night at City Recital Hall I got to go back in the evening. It was raining though so we didn't really hang around. At night the nocturnal bird calls are played. 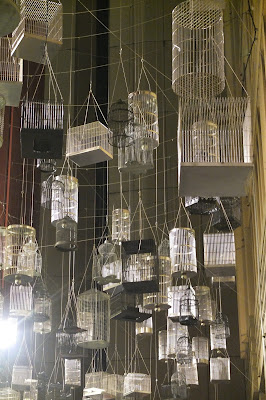 I'd long thought that Forgotten Songs reminded me of Dickens' Miss Flight in Bleak House. And what did I find in Dymocks that very same day?


Actually it looks like Penguin have a lovely new set of Dickens hard back editions. I might really need these.

Louise, these are so cool-looking. Thanks for sharing.

I'm so glad you finally got to visit Forgotten Songs - it's quite lovely isn't it? A great way to start a night out at Angel place :-)

This sounds like such a melancholy display. I bet the songs echo in the walkway with the building on either side. Lovely. Here's Mine

This would be fantastic to see!!! And that book cover is gorgeous.

It's sad that the development of Sydney caused the birds to disappear. But, it's great that they put on this display.

Sweet and also sad. One of the best parts of my daily summer walk is hearing all the birdsong. Our town is a great spot for birders, they say.

Lovely artwork and commemoration of the birds. Thanks for sharing, and I love that book cover, too.

What an amazing exhibit, especially since it includes birdsong. What a vivid representation of what has been lost.
Thank you for visiting my blog and leaving a comment.
Sandy @ Writing With a Texas Twang

What a thought provoking piece of art.

A beautiful idea for a display, but sad, too. Lovely post!

What a whimsical and beautiful display.

Sad and so poignant a way of illustrating just how much we humans impact nature ... but visually, the art instillation is brilliant!

What an interesting and poignant display!

I hadn't heard of this before. What a wistful and sobering exhibition. I must look for it- I'm going up to Sydney in about a fortnight.