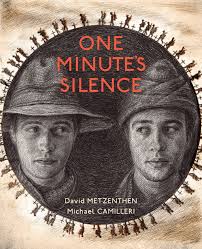 I was very keen to read One Minute's Silence because it appeared on the CBCA Shortlist this year, not just once- but three times! It made the shortlist for Picture Book of the Year and New Illustrator of the Year, and is a Notable Book for the Eve Pownall Award. That has to be an achievement in itself.

One Minute's Silence is a powerful picture book. A picture book for older thinking children, not a book for the fun of a noisy bedtime reading session or to calm toddlers for bed. One Minute's Silence asks us to imagine the unimaginable when we observe the minute silence to remember those killed in war. It focuses on the Gallipoli campaign, but One Minute's Silence asks us to imagine the war from both sides- from the view of both the young Anzacs rushing the beach in the predawn light and the young Turks who stood at the top protecting that beach and their country.

Michael Camilleri's illustrations are magnificent simple line drawings. He shows us a class of bored Australian school children about to observe their own minute's silence. Camilleri takes these same high school kids to those steep rocky beaches at Gallipoli, to see the conflict, the death, the hardship all round. To see the humanity of both sides, as they see the beach, the battle and the war from both perspectives. 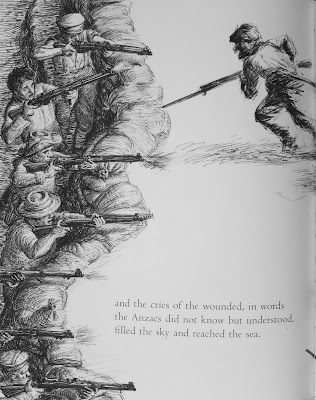 It's a poignant moment in a sobering book. 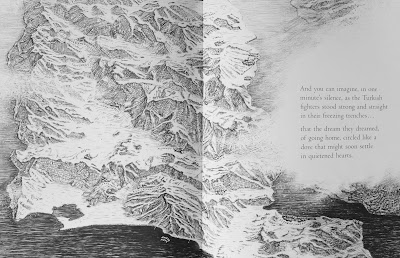 Teacher's Notes for One Minute's Silence are available from Allen & Unwin.
Posted by Louise at 12:21

Why don't we have more picture books for older children? I think we should.

I loved how well this book portrayed & humanised both sides of the conflict.