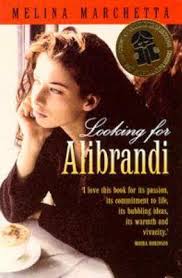 I'm a bit sad that I left Looking for Alibrandi for so long. It's not like it wasn't famous enough. It was. I think I've even seen the movie at some stage. So I knew a bit about it already. Looking for Alibrandi was Melina Marchetta's debut novel, all the way back in 1992, so long ago that Ansett was still flying our skies and is referenced in the book. Since then Melina Marchetta has established herself as one of the big names in Australian YA, and I know this won't be the last time I'll be reading her work.

Looking for Alibrandi is a classic coming of age novel. Josie Alibrandi is 17 and living in Sydney's inner west (in a suburb that I lived in for many years, so I felt an immediate connection).  It’s always a thrill to recognise locations, street names etc- Glebe Point Road, St Johns Road are all well known to me. I’ve walked down them many, many times. I think I’ve even been to the McDonalds that Josie works at, although it would have been a long time ago. So long ago that Josie could have served me.

Glebe has two facades. One is of beautiful tree-lined streets with gorgeous old homes, and the other, which is supposed to be trendy, has old terraces with views of outhouses and clothes-lines. I belong to the latter.

I did too. Our story here is about three generations of women, one widowed, one never married, one still single, a schoolgirl still, but starting to spread her wings. This will create conflict in any family, but particularly in a strong- minded Italian matriarchy. Josie lives with her mother and is in her final year of schooling. She is about to start a tumultuous year.

The seventeen that Janis Ian sang about where one learns the truth.

I liked the reference to Janis Ian’s At Seventeen, but wondered if teenage readers in the 90s or now would get the reference? I guess they can Google it now if they're that interested. But it's important to remember that this book was written in the 80s and published in the 90s- nearly ancient history now in terms of YA.

I think though that Looking for Alibrandi was one of the first big selling Australian YA books, and certainly one of the first to deal with characters from diverse cultural backgrounds. Josie's Italian heritage is important to her character, and vital to the story. Looking for Alibrandi deals with lots of big issues- our multicultural society, cultural identity, family secrets, youth suicide, school, first love and friendship, and so it's easy to see why it is still being taught to high school students in Australia. But it's not just issue driven book, it's a story told with humour and warmth.