I recently used a short break in Sydney to read the last of David Walliams' books that I hadn't read previously. This of course puts him (and me) in a rather enviable position- I've now read all of David Walliams' published books for children- well the novel length ones, I do have a few picture books to go still and there will be a new book again in September 2015, but this time I'm ready for it.

Demon Dentist was published in 2013, around the time that I started reading his work. It's certainly no wonder that he is phenomenally successful and wildly popular with kids- his books are fun, and a bit naughty and clever, and I think it is right that he is the most likely successor to Roald Dahl that we have writing today.

Alfie hated going to the dentist. As a result the boy's teeth were almost all yellow. The ones that weren't yellow were brown. They bore the stains of all the goodies that children love, but dentists hate. Sweets, fizzy drinks, chocolate. The teeth that were neither yellow nor brown simply weren't there any more. They had fallen out. One had bitten into a toffee and stayed there. Assorted fruit-flavoured chews had claimed others.


Alfie lives with his father who is very unwell as a result of his work as a coal miner.

A great big bear of a man, he had loved working down the pit and providing for his beloved son. However, all those years he spend down the mine took a terrible toll on his lungs.


Alfie's Dad is confined to a wheelchair, and can no longer work. Alfie acts as a carer for his father, and they get by on very little money. So when a do-gooder social worker turns up intent on getting Alfie to the dentist and on eating every chocolate biscuit in the house there was always going to be trouble. 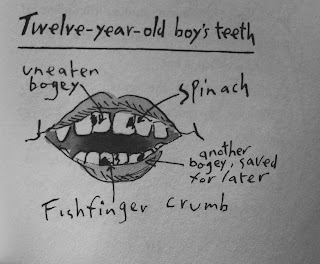 Demon Dentist is probably the most scary of David Walliams' books. So scary it even comes with a warning. 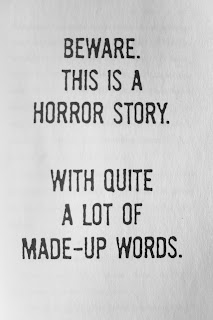 It is also perhaps his most plot driven book- it gets pretty exciting towards the end. All of David Walliams books have a warm heart, but are never preachy. Here he shows us that you can find happiness after sadness, and seamlessly incorporates multiracial characters to represent a modern Britain/world.

Demon Dentist plays on the widespread fear of dentists- who doesn't hate going to the dentist? Kids growing up now do fare much better, but the concept of pain free dentistry certainly didn't exist when I was a kid, and I think for most adults a trip to the dentist is at least a drudge, if not downright terrifying. Children of course like to eat lollies and other sugary things that are not good for their teeth, and tooth decay is still a very modern problem. Of course it is all dealt with in traditional Walliams style with fart jokes and teachers underwear on display.

"But tooth fairies aren't real..." protested the boy.
The witch smiled. "Oh yes, they are. Annoying little do-gooders flapping all over the place."


Check out my David Walliams link to read my other reviews and ponderings. Billionaire Boy is still my favourite.

Nice post! My friend is a budding dentist and she is practicing with a very good dentist Manhattan Beach. I am soon going to that clinic for my tooth extraction. It has been a very long time that I got my dental check-up done. Therefore, this stage has arrived. I am scared but I know they are good.

Finding a reliable and family-friendly dentist in Richmond Hill can be a task. Especially since the wide range of options can leave you confused about where to go. However, there is one dental clinic in Richmond Hill hat stands out from the rest. That is none other than Hummingbird Dental Clinic. We are proud to announce that we are an Official Nominee for the 2022 Top Choice Awards. Thank you to all who have taken the time to nominate us! Now, we need your help to WIN. Voting is now open and we would appreciate you taking the time to vote for us. Winning the Top Choice Award is one of the largest endorsements a business can receive within North America, so this is a BIG deal.