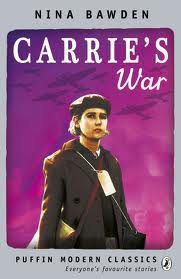 
Sheep and mountains. 'Oh, it'll be such fun,' their mother had said when she kissed them good-bye at the station. 'Living in the country instead of the stuffy old city. You'll love it, you see if you don't!' As if Hitler had arranged this old war for their benefit, just so that Carrie and Nick could be sent away in a train with gas masks slung over their shoulders and their names on cards round their necks. Labelled like parcels- Caroline Wendy Willow and Nicholas Peter Willow - only with no address to be sent to.


How extraordinary that war time evacuation was. I can't imagine what it must have been like for those parents to send their children away, to trust their survival to the kindness of strangers, to never know if they would see each other again.

Carrie and her brother Nick are evacuated from London to Wales, but that is merely the premise, not the story and we meet an increasingly odd cast of characters in the small Welsh mining village where the children stay. Many have great, Dickensian names. Albert Sandwich. Mister Johnny. Hepzibah Green. Carrie and Nick after a "kind of cattle auction" are taken home by kindly Miss Evans. But it is her brother, shopkeeper Mr Evans who rules the roost.

Just a tall, thin, cross man with a loud voice, pale, staring, pop-eyes, and tufts of spiky hair sticking out from each nostril.


Councillor Samuel Isaac Evans was a bully. He bullied his sister. He even bullied the women who came into his shop, selling them things they didn't really want to buy and refusing to stock things that they did.


Mr Evans is parsimonious and mean. His sister Auntie Lou appears weak and to be living a rather servile life, although there are signs that she wants to break free. There is of course a great contrast with the spooky house in the valley where their friend Albert Sandwich is living, which is actually a warm and welcoming house but situated in a dark valley with creepy trees and echoes of Welsh myths. Carrie and Nick and welcomed there, celebrated- and fed. Still there is the unusual Mrs Gotobed- an odd, vivid character, fallen glory, living out the end of her life in a sad state and wandering about the Welsh valleys in her fine collection of ball gowns. She reminded me of Miss Havisham in Great Expectations (even though I haven't read that yet).

A mystery is set up in the first chapter, when a now adult Carrie, revisits the village with her own children.

"I did a dreadful thing, the worst thing of my life, when I was twelve and a half years old, or I feel that I did, and nothing can change it..."


That mystery sustains us throughout the book. In the end I think even though I liked Carrie's War quite a bit, I didn't love it as much as I expected to.

What a good review you provide. Such nice quotes and details.