How can you go accidentally? Well you see I thought I was going to a Sydney Writers' Festival Regional Live Streaming event, which I think was a new concept for this year. 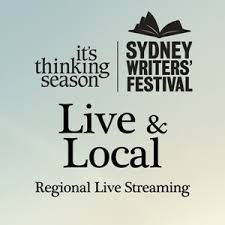 And I did. I got to see David Walliams' session- which naturally was great, and I should tell you about it sometime. But I also went along to a live event that day, and it turns out that this was part of the inaugural Bathurst Writer's Festival.

The live event I went to was Writing for Children. It featured four local authors and illustrators. I've seen Freya Blackwood speak quite a few times before, but I admire her work greatly and am always interested in what she has to say. The other three authors were all completely new to me- it was great to learn that there are so many local authors working away. Greg Bastian. Louisa (L.J) Clarkson. Jeffery E Doherty.

Each of the authors spoke about their work. Freya is of course the most well known. She is an illustrator who considers herself a story teller too, which is obvious when you think about it, particularly with those exceptional illustrators such as Freya who do more thoughtful and deliberate work. Freya enjoys the amount of extra story she can add through her illustrations.

Greg Bastion writes historical fiction for upper primary/lower secondary schools. He spoke of writing his latest book The Goldseekers, about two Korean children living on the Australian goldfields of the 1850s.

Louisa writes as LJ Clarkson and seems to write aimed at the American market, which I must admit disappointed me a bit. She writes magical YA, and mainly spoke of her novel, The Silver Strand, where a girl has a magical grey hair. Her books often have a bullying theme.

Jeff Doherty was the most exuberant of the authors this day- obvious before he even spoke as he was resplendent in a colourful vest. He is an author/illustrator who works in a school and writes junior fiction. Interestingly he said that he hated reading as a child and didn't read his first novel until he was in Year 11. He wants to write the book he would have liked to read as a kid.

At one stage the panel recommended their favourite books for young people. And they're a great selection of books.

I hope the Bathurst Writer's Festival continues to develop and evolve and look forward to seeing how it progresses.
Posted by Louise at 11:48

I love Freya Blackwood's style - the expressions she achieves on her characters' faces are just brilliant.