Way back in 2013 we spent a fabulous few hours one morning on a Parisian chocolate tour from Context Travel. I don't often join tours, particularly in cities I know moderately well like Paris, but was so glad that we did this one. I had seen Carol of Paris Breakfasts description of her tour  in the months leading up to our trip, and knew that our group would be keen too. Six of us went along this morning.

We met up with our guide, Laurel, outside Eglise St Germain de Pres one slightly cool and damp morning. Laurel was an American pastry chef who had been living in France for 19 years. She was an enthusiastic and knowledgable guide.

Laurel explained that people have been eating chocolate for 4,000 years, although for most of those years their experiences were nothing like the gustatory delights we were about to experience that morning. The Incas had used cocoa beans for taxes. The explorer Cortes was the first European to taste chocolate- ingested as a drink back then. Cortes took it back to Spain and added vanilla and sugar to the drink.

Spain kept their chocolatey discover to themselves for about 100 years, before two Austrian princesses adopted it and spread the practice outside Spain and into France. Marie-Antoinette loved chocolate, and employed her own pharmacist, Monsieur Debauve to make her particular chocolates. At that time egg white was whipped into the chocolate, and Marie-Antoinette favoured her pistoles, discs of flavoured chocolate, as her medicines. Possibly Marie-Aintoinette was the first woman documented to use chocolate to help her mood? 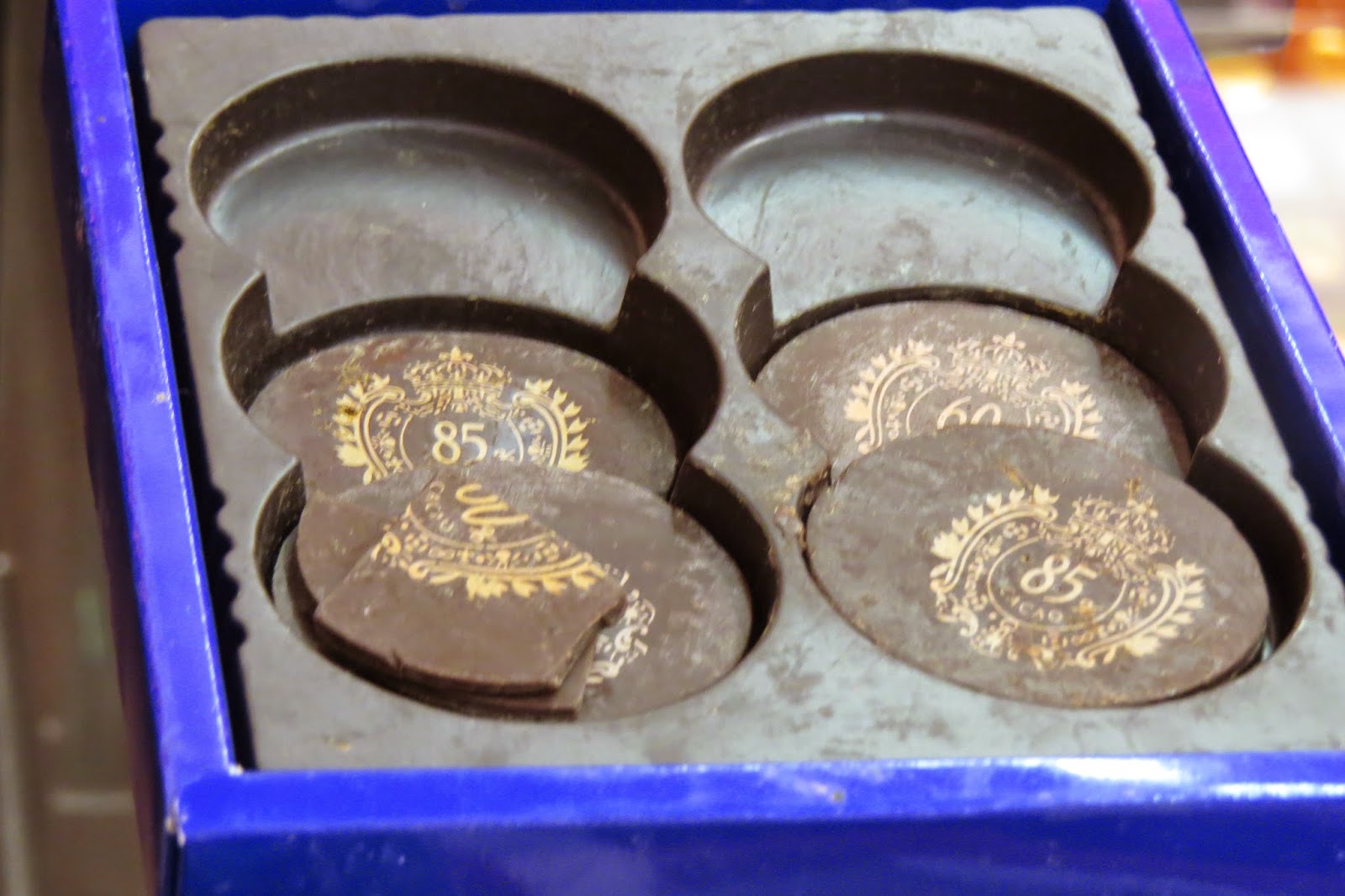 Monsieur Debauve was saved from the guillotine by Napoleon, and he was to become chocolatier to the emporer after the revolution. He set up a business with Monsieur Gallais in 1800, the shop still trading at the location at 30 Rue des Saints-Pères where they opened in 1806. Today we started our tour passing by their historic location. We were to visit houses showing us the historical and the modern approach to French chocolate. 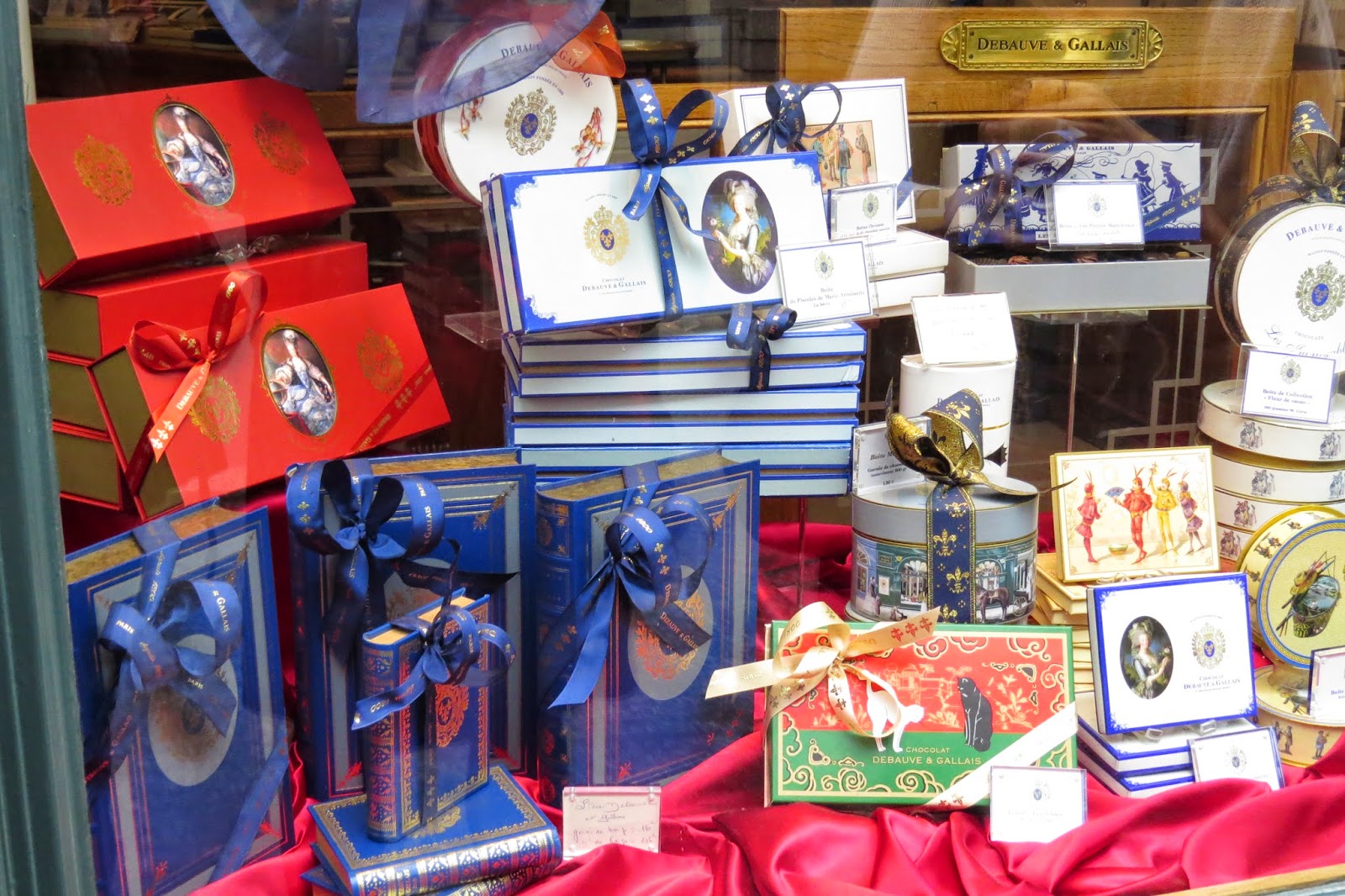 The French worked chocolate into their favourite pastries, viennoiserie, again brought to Paris by Austrian princesses, creating the now classic pain au chocolat. We then visited Josephine Bakery at 42 rue Jacob 75006, run by an ex head baker from La Grande Epicerie (our corner shop this trip) Benoît Castel. He makes an intriguing chocolate bread, apparently good with fois gras, and quince bread, sadly not sampled on this chocolate focused day.

Next we visited a Ladurée Salon de Thé. Monsieur Laduree had opened a bakery at the same location, sadly it had burned down in 1870. Madame Laduree created the first salon de the when the shop was rebuilt. At that time ladies were not able to go to cafes or bars, which were the domains of men. Until the creation of the salon de the fashionable ladies were only able to meet their friends in their own houses. Laduree was family owned until 1993, and it was the grandson of the original Monsieur Laduree, Pierre Desfontaines, who continued the creative nature of the family by inventing the macaron as we know it in 1930.

This day we were to sample the three different chocolate macarons that were on offer at Laduree that day. Chocolat. Ghana. Venezuela. Each was quite a different, glorious taste, the chocolat basic, the Ghana more subtle and the Venezualan deeper. 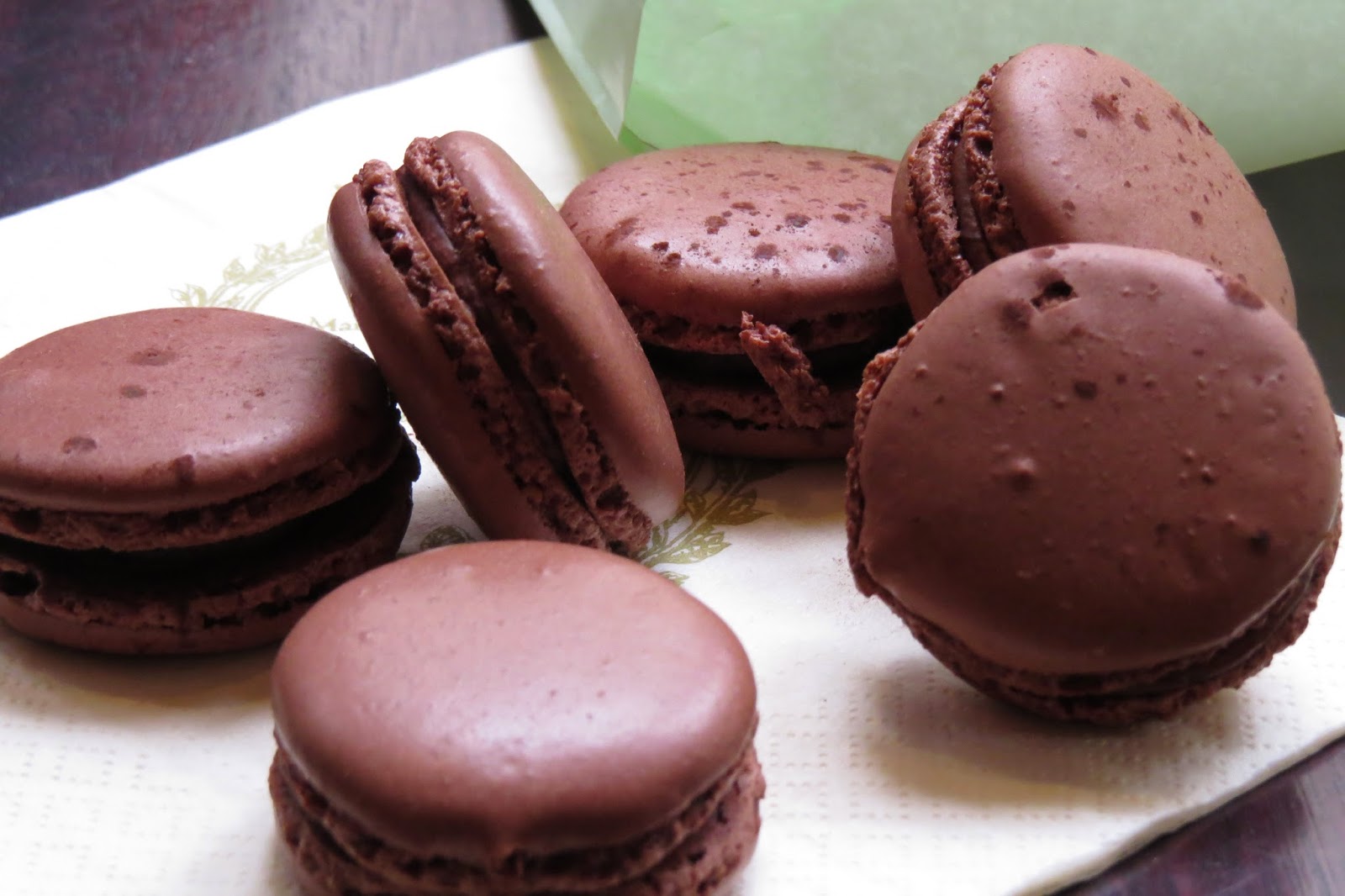 Laurel explained that tradition is particularly important to the French, they are not early adopters of new trends, which is why the pastries at different bakeries will often look similar, they are classics and generally not to be toyed with. Debauve and Gallais still make the pistoles as Marie-Antoinette liked them. Laduree still uses their original 19th century packaging design by Jules Chéret.

We took a brief detour from chocolate to visit France's only master caramelier Henri Le Roux at his amazing store at 1 Rue de Bourbon le Chateau. Henri is the man who invented Caramel Beurre Sale! He is well worth a visit to worship at his feet. We sampled both his amazing caramel and his exquisite chocolates, and I think all of us went away with a jar of his sensational CBS.

The last stop on our tour was at Pierre Marcolini one of the new forces in Parisian chocolate-even though he is Belgian. I had heard of Pierre before arriving in France and was very keen to visit. Clotilde Dusoulier had informed me that Pierre Marcolini uses reconditioned 150 year old machines to process his chocolate as he believes that this creates a superior chocolate even though the production is a little slower. We sampled four of his different place of origin blends- each quite different, each lovely, but the Equador was exquisite- it had beautiful floral notes like a flavour had been added- and yet it was simple chocolate magic. 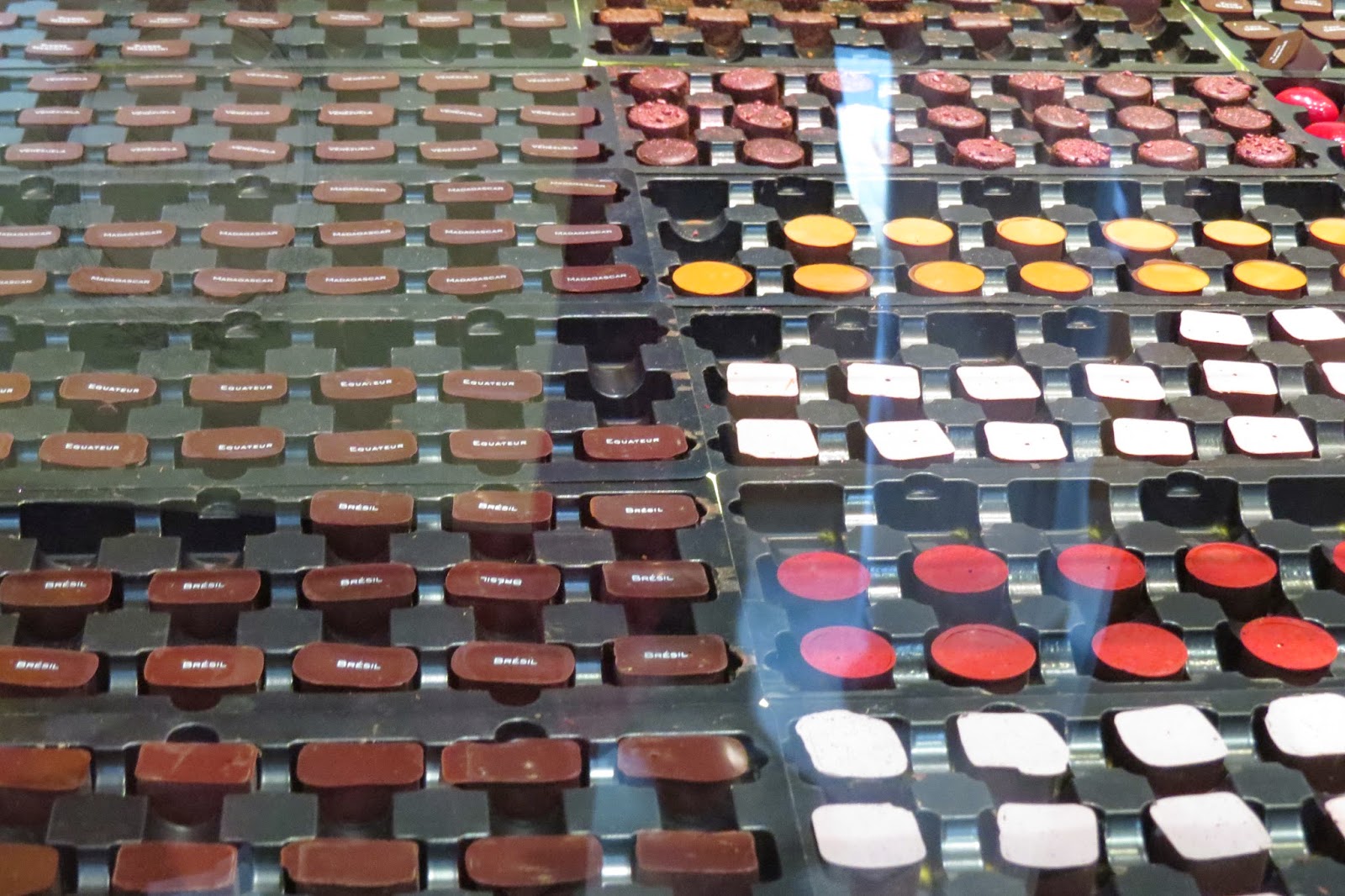 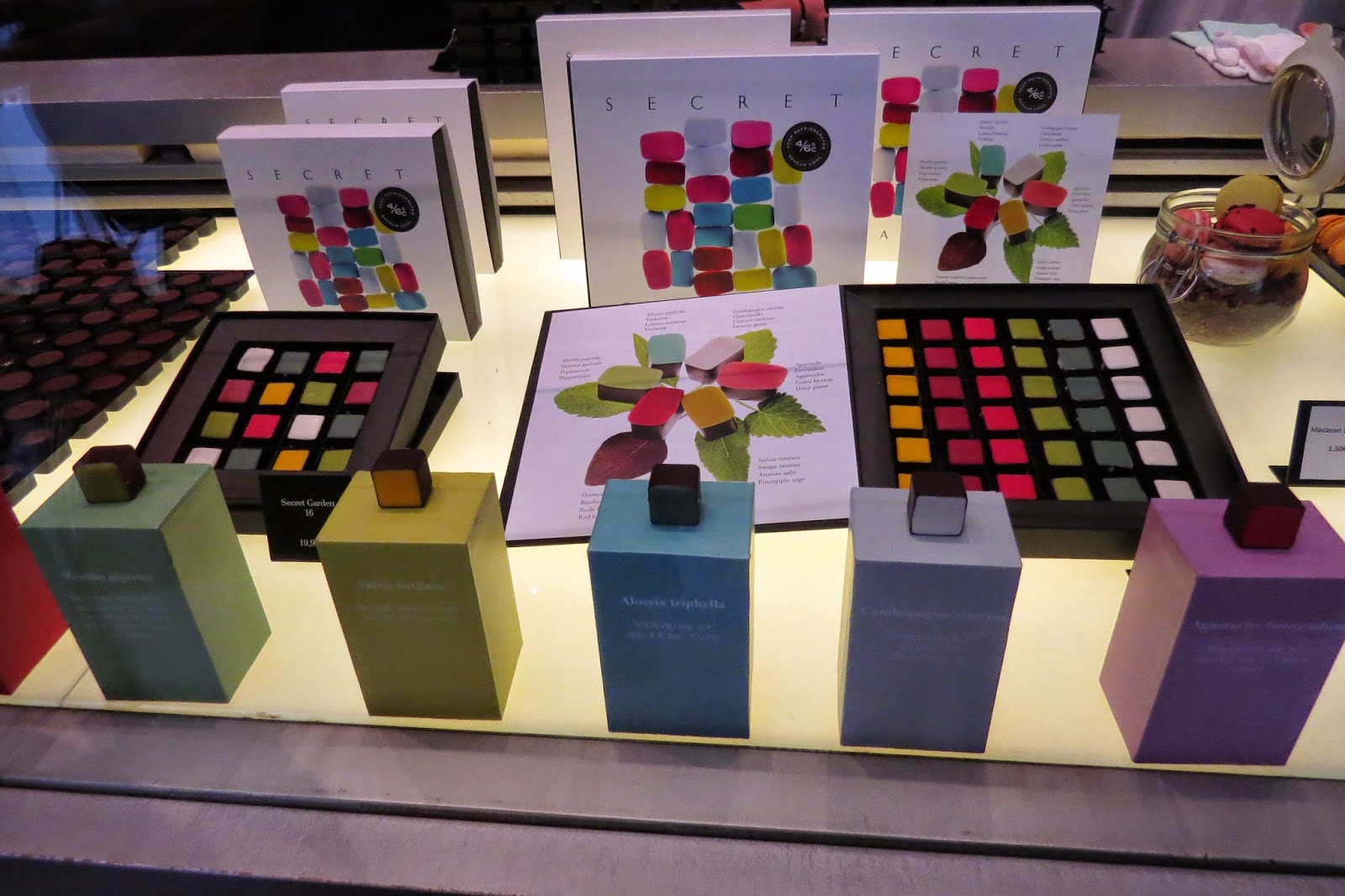 Every morning in Paris is amazing. This one was particularly splendid.

Now if only Marie-Antoinette had said "let them eat chocolate" maybe she might have changed the mood in Paris & kept her head!

I have been a bit quiet on the commenting front lately, but I am taking note of all your tours for future reference :-)

That looks wonderful - I suspect that as a solo traveller I would also get a lot from this sort of tour in terms of seeing things that would otherwise be difficult to negotiate for myself! Yum.

Yum. Such a wonderful post. I could look at these pictures forever, if they didn't make me crave chocolate so bad. Here’s my Dreaming of France meme

Henri Le Roux and those caramels-delicious. What a fun morning. Why did I not see this a few weeks ago before I went.

PS yes that is me in the photo.

CBS! Caramel au beure salé, combined with chocolate is just my favorite. Thanks for a virtual trip to Paris, ma chère.

Great post learnt a lot although I'm a parisian and love chocolate! I'm also in a quest to the finest chocolate in the world. Tried marcolini with its finest chocolate coating, tried Jean Paul hevin ans it's oyster hot chocolate drink but I guess my favourite is Patrick Roger. Have you tried?

Oh and I popped by via #allaboutfrance (and I'm kind of an Aussie too!)

Can't wait to try these places!

What a heavenly thing to do...I'd be sorely tempted to do this tour too. Interesting to hear how chocolate spread across the world. Thanks for linking up to #AllAboutFrance