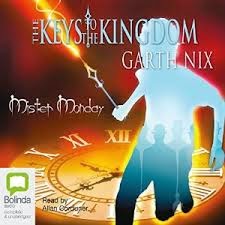 Arthur Penhaligon is a true unlikely hero. A sickly asthmatic boy starting at a new school two weeks into the new term because he's been in hospital with his asthma. Arthur suffers another asthma attack during cross country on his very first day and sees some rather odd things. He is given a special key on the basis that he is about to die.

Arthur is soon grappling with dramatic adventures of a decidedly otherworldly nature. There are mysterious beasts, dog faced- half human Fetchers, a veritable astonishing array of monsters and creatures. But Mister Monday is not just an action story- Garth Nix's intelligence, far reaching curiosity and word play really shines through the whole story. It's all so very clever. He weaves many worlds, history, time and the seven deadly sins into the story.

Mister Monday was originally published in 2003, and is the first in the seven book Keys of the Kingdom series. Garth Nix has created an incredible, complex amazing universe. His writing is so descriptive, it's almost like being there, like you know what it would be like to be in this unimaginable fantasy world.  It is an incredibly exciting story with many plot twists and cliff hangers. I hope to get Master Wicker to read/listen to this- I think he'd love it.

I listened to the audiobook of Mister Monday while driving to Newcastle for the 2015 Newcastle Writers Festival. It was fantastic, and made the kilometres literally fly by. I was very pleased to see Garth Nix in a session at the festival. I've seen him speak a few years ago in Adelaide, but I didn't know all that much about him at that stage, and it's always nicer to see an author speak if you've read at least some of their work I  think.

All the way in the car something seemed familiar about the audio version, rather unbelievably it took me until the final disc, disc 7 (coincidence, I expect not) to work it out. The narrator totally reminded me of Monty Python and the Holy Grail! And then I knew why Arthur Penhaligon had seemed familiar, surely it must be a riff on Arthur Pendragon? Oh and don't you hate it when you have a blinding insight like this, all by yourself, and there it is, already made on wikipedia. Hmph. Although I had to resort to my knowledge of Monty Python to work it out, not my knowledge of the classics (which is scant and sadly lacking).

This is a series and an author definitely worth pursuing.