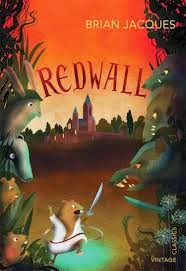 I just knew that I wouldn't like Redwall. I knew it wasn't my thing, and put off reading it for ages. Years, probably. Fantasy. Blech. Talking mice. Oh ho hum. And then I started reading it. I didn't just like Redwall- I loved it!

It isn't really fantasy, well not what I think of as fantasy, not map at the front fantasy, and Brian Jacques didn't like his writing referred to as fantasy either. He preferred them to be called old fashioned adventure stories, or good yarns. And a good yarn it certainly is. The action starts very early on, with the first death on page 21, and rather unusually Brian Jacques isn't afraid to kill off some of his major characters along the way. Perhaps Redwall is the Game of Thrones of children's literature?

Redwall is the story of a tumultuous time at Redwall Abbey, a rather medieval, commune type of institution that is home to a peace loving band of mice mainly, but with assorted other friendly rodents and woodland creatures- Constance the badger, a hedgehog called Ambrose Spike.


Down long ages the beautiful old Abbey had stood for happiness, peace, and refuge to all. Diligent mice tended the neat little vegetable patches which every season gave forth an abundance of fresh produce; cabbages, sprouts, marrows, turnips, peas, carrots, tomatoes, lettuces and onions, all in their turn. Flowerbeds, heavy and fragrant with countless varieties of summer blooms from rose to humble daisy, were planted by the mice and husbanded by the hard-working bee folk, who in their turn rewarded Redwall with plentiful supplies of honey and beeswax.


Very early on danger literally rolls into town in the form of a gang of rats under the charge of Cluny the Scourge. Cluny of course sets his sights on becoming lord and master of Redwall. Cluny is an excellent villain.


Cluny knew the value of fear as a weapon.
And Cluny was a fearsome figure.
His long ragged black cloak was made of batwings, fastened at the throat with a mole skull. The immense war helmet he wore had the plumes of a blackbird and the horns of a stag beetle adorning it. From behind the slanted visor his one eye glared viciously out at the Abbey before him.


Cluny's rats have great names. Scumnose. Skull face. Mangefur. The hero of Redwall is a young mouse called Matthias, he's ernest but clumsy. It is no accident that these are stories of mice.


"Mice are my heroes," Mr. Jacques said, “because, like children, mice are little and have to learn to be courageous and use their wits." Source


As an adult reader this is easy to see.


Matthias felt that he had grown up overnight. Duty was a mantle that he had taken willingly upon his shoulders.


It's classic good versus evil stuff, and it's been wildly successful, selling more than 20 million copies worldwide and being translated into 28 languages. As well as duelling sides there are secret passages, secret messages in code and Brian Jacques gives young readers plenty of delicious food descriptions too, in a similar way to Enid Blyton. The bounty of an English summer, suited to mouse tastes. They eat nutbread, quince pie and some mice are more fond of nut brown ale than others. Brian Jacques also uses a sophisticated language, with lots of magnificent words- sibilant, ululating, legerdemain and milksop.

As with many writers Brian Jacques took inspiration from his own childhood and life to create stories for children. Brian Jacques left his Liverpool home at 15 to join the Merchant Navy. Years later Jacques wrote Redwall as a story to read to the deaf children that he would visit at Royal Wavertree School for the Blind when he delivered their milk. He didn't like the books they had at the school to read to the children, finding them too real, too much divorce, too much teenage angst and misery. He based his Redwall animal characters on human characters that he had met over time. Cluny and his sea rats are based on merchant sailors. and the unionised shrews are based on Liverpool dockworkers. Even the red walls of Redwall Abbey drew inspiration from the red walls of Stanley Park in Liverpool.


A mouse is the child, and the child is trying to resolve something, to be better, to be a warrior, to be a hero, and if the mouse can, why can’t the child?

Brian Jacques is fantastic, and so is his Redwall universe. I'll read more of it one day. Redwall is definitely a book I wish I'd discovered when I was still reading aloud to my son. I know he would have loved it.

great selection of books. I have found another France meme-I linked to it today.