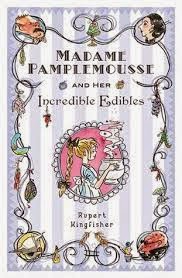 I do so love Books You've Never Heard of But Just Have to Read. Happily I found the third book in the Madame Pamplemousse series browsing my local library shelves- an excellent source for such books of course. Being moderately OCD about such things I had to get the first in the series sent over so I could read them in order. It was indeed so delicious that I couldn't wait to get the second book from the library. These books are such perfect little confections it made sense to review them collectively.

Madame Pamplemousse and her Incredible Edibles is the first of this utterly delightful series, set in Paris, but written by Englishman Rupert Kingfisher. Madeline is a young girl forced to work under rather slave like conditions in her uncle's Parisian restaurant every summer while her parents go on a safari or round the world cruise. Madeline's uncle is the deliciously named Monsieur Lard, who runs The Squealing Pig. Monsieur Lard is jealous of his young niece's abilities in the kitchen.

The truth was she had made him so violently jealous he would never allow her to go near a cooker again. So instead she had to scrub the plates, pots and pans- giant heaps of them stacked up to the ceiling and everyone covered in slimy fat.


One day Madeline becomes distracted by a cat while going to buy some Mixed Innards Pate for The Squealing Pig, and so she finds Madame Pamplemousse and Her Incredible Edibles.

The cheeses are of an unimaginable smelliness, some dating back to medieval times, and each of the pots and jars have their contents written in fine, purple letters: Scorpion Tails in Smoked Garlic Oil, Crocodile Kidneys in Blackberry Wine, Cobra Brains in Black Butter, Roast Piranha with Raspberry Coulis, Electric Eel Pate with Garlic and Prunes, Great White Shark Fin in Banana Liquor and Giant Squid Tentacle in Jasmine-Scented Jelly.


I devoured Madame Pamplemousse and her Incredible Edibles in record time. It's an utter delight. There does not seem to be all that much out there about Rupert Kingfisher, but I was not surprised to find that he loved Roald Dahl, comics and horror as a child- the shadow of Roald Dahl certainly looms large in his writings. 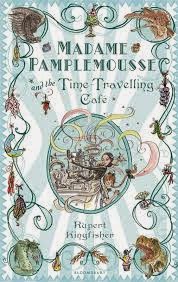 The second book in the series is Madame Pamplemousse and the Time Travelling Cafe. Paris is threat from an evil President.

The President hated Paris. He loathed it with a passion. To him it seemed a lazy, slovenly city, where people did notghing but eat and talk and fall in love when they should have been doing something far more practical, like cutting down rainforests instead. And so he began planning Paris's systematic destruction.


There is a rather complex plot involving time travel, coffee and mythic beasts in a plot to save Paris from the evil President and stupid government. While there were some glimpses of Paris this story didn't work for me in the way the first one did. 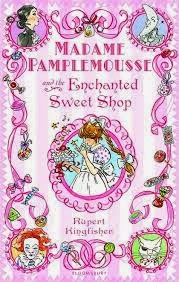 The Third book in the series, Madame Pamplemousse and the Enchanted Sweet Shop had me in from the very first sentence.

In the city of Paris, in the middle of the River Seine, there is an island called the Isle Saint Louis.

Oh there is indeed, and it is magnificent. I became lost in reverie at this point and had to start again. It is on Ile Saint Louis that the Enchanted Sweet Shop appears one day. Our hero Madeleine has recently started at a new school, and settled in with a group of friends. Then a new girl, Mirabelle, starts the next term, and things start to unravel for her. Mirabelle bullies Madeleine using rather typical techniques of high school girls, and turns her group of friends against her.

Madame Bonbon finds Madeleine crying in Notre Dame and offers her solace with a special box of her sweets.

'Well Madeleine, I have to say, you are different, but that's nothing to be ashamed of. And as for "fitting in", personally I never have, nor do I intend doing so. But you know,' she paused to smile, 'that has never stopped me having friends.'

I'm glad to have found this lovely series of books.

Labels: Books on France, Books You've Never Heard Of But Just Have to Read, Paris

A series of books made especially for you, Louise :-)

I love the sound of the word 'pamplemousse' and looked it up ; grapefruit sounds like a great name for this rather tart uncle.

Louise, These books remind me somehow of Mrs. Piggle Wiggle who always had a magic potion. I love the sound of them Thanks for playing along. I'm off to find some chocolate in France now.