The Birds of the South Coast

It almost seems a life time ago, but last September/October Master Wicker and I had a short holiday on the beautiful South Coast of NSW.

It's a lovely area, one where I hadn't spent much time. See my South Coast Panoramas.

Naturally, I was keen to check out some birds while we were there. We did see some, but sadly I don't think any of them were new for me. I did get some good photos though.

It's almost impossible to get good photos of lyrebirds though. They are always in dimly lit areas, and are constantly in motion, continually pawing (can birds paw?) through the undergrowth looking for dinner. 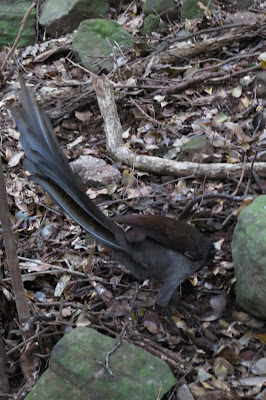 You'd think this bird would be easy to identify, but I had a hard time. It should be a Spotted Turtle Dove I guess, but there aren't any obvious spots. 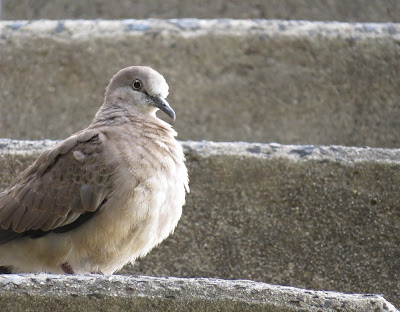 This Grey Butcherbird was an exciting sighting for me, I've had glimpses of them before. This fellow flew off as soon as I got this photo.

We stopped at many beaches, one of them had a distinctive rooster noise as we got out of the car. And sure enough there he was! 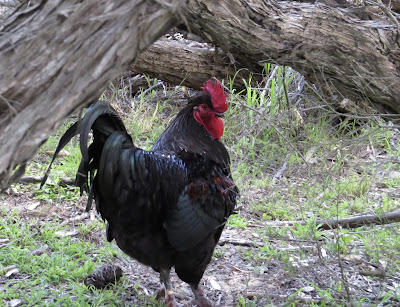 It's always a joy to see some Rainbow Lorikeets (Trichoglossus haematodus), they're so pretty. 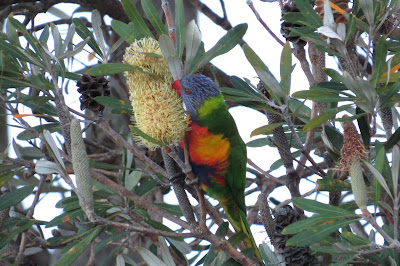 An Australasian Gannet (Morus serrator) on the wing. 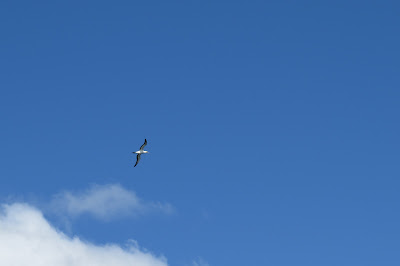 Happily, I see Crimson Rosellas most days near home. I've even been bitten by one as I released it from bird netting in the back yard. They hurt.

The birds at Pebbly Beach are very used to people. The beach is also famous for the resident kangaroos hanging out on the sand.

I used to see king parrots all the time in Mudgee, but haven't seen one since moving to Sydney - lots of mynah birds though :-P

So many beautiful colors! Quite amazing.

Lovely shots! I really like the Rainbow Lorikeets. Thanks for sharing...and for visiting my blog.

Such gorgeous birds! I love their names, too. So descriptive.
I didn't post photos today, but I'm having fun seeing everyone else's beautiful pictures.

WOW, so many beautiful birds - what a variety! Thanks for sharing them.