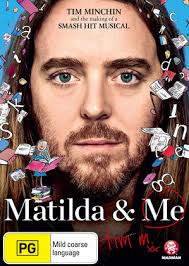 Recently I got to watch Matilda & Me again, a fabulous documentary that I taped back in April 2016 I think. It's still languishing on my hard drive and I watched it again recently to make the ironing tolerable one night. Matilda & Me is the rather incredible story of how Tim Minchin came to write the musical Matilda, and was filmed in the lead up to the Australian opening of Matilda.

Matilda & Me was made by Tim's youngest sister Nel and it also is a chronicling of Tim's own story- starting with his childhood in Western Australia. He was the second of four children.


"As a little kid I was very fat, but I also had allergies and terrible asthma and I was deaf as a post. Mum thought there was something wrong with me I think. "

He was a musical kid, in a musical family. They all put on family concerts frequently. Tim didn't do piano lessons after the age of 12, but always playing.


"It's not practice, it's curiosity"

He still always wants to be the best at everything.

Tim Minchin had an early love of Roald Dahl and remembers receiving The BFG one Christmas as a child, and that his sister got Matilda. At 25 he actually approached the Roald Dahl Estate asking to be able to write a musical based on Matilda. He backed away when they asked for a sample of his score as he couldn't read or write music!

Tim then kept working at his craft, progressing to his comedic act. He came to notice after performing at Edinburgh in 2005. So much so that in 2008 the Royal Shakespeare Company approached him to compose the musical Matilda. And history was made.

Matilda is such a fabulous show, which I was lucky enough to see it in Sydney and Melbourne in the past year or so. Matilda & Me documents the rehearsals prior to the Australian opening.

There's a great series of Behind the Scenes Extras available on youtube. In Episode 1 it's fascinating to watch the four young Matildas as they rehearse and do boxing training in preparation for their roles.

Episode 2 is a great mini documentary on Roald Dahl, his writing practice and his life.

Labels: on the tele, Roald Dahl