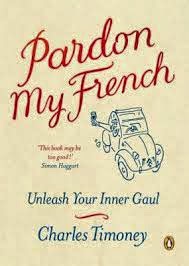 I have a very soft spot for this book as I bought it in a book shop on Place Saint-Michel on my most recent trip to Paris in October last year. I started reading it while I was away, but then put it aside while travelling, and picked it up again recently. I've been reading it off and on for some time. It's an easy book to do that with.

Charles Timoney is a patent lawyer. In the 1990s both he and his French wife were laid off in the same month. They took it as a sign, and applied for jobs in Paris. Charles got his job and they moved to Paris, he was then on a steep French language learning curve. While he spoke English at work, he needed to learn French to shop, to dine, to live.


Learning a foreign language is a long and exhausting business.


If you are not born into a bilingual family, it is going to take a good seven years' hard study to become more or less bilingual- if you are lucky.


So there'll be many more years memorising of verb conjugations, passé composé and struggling with articles for me. I'm sure it'll take much longer on a part-time basis, puddling along in Australia.

Pardon My French uses French words and phrases as a window into French culture as well as the mere words. It is organised in subject groupings such as- Food and Wine, How to Sound French, The Business World. Much of it is extremely practical advice for the visitor to France. Handy advice on every day tasks like buying bread- yes you can ask for 'une demi-baguette' at the boulangerie, and in a restaurant you can ask for 'une carafe d'eau' ( a carafe of tap water) when you are only offered mineral water (Eau plate ou gazeuse?/Flat or sparkling water). Australians drink a lot of water, and has been a real moneysaver for us over time, but it wasn't something I knew on my first trip.

I've long been curious about going to the movies in France, but always been anxious about whether I'd understand enough of it to be worthwhile. Now thanks to Charles Timoney I know to look for VO/VF. Version Originale/Version Francaise.


'Version Originale' means that the film will be shown in its original language with French subtitles, while 'Version Francaise' means that it will be dubbed into French.


So simple once you know! I want to go back to Paris so I can go to the movies. Well that's one reason... I walked past UGC Danton many times last year, and their website does indeed list VO/VF- another French mystery explained.

While Charles advises us to "never even think about attempting to explain the rules of cricket to a French person" he helps us understand the French obsessions with documentation, wedding cakes, suppositories and the places where things happen- where you were born, where a cheque was written.

But it was Page 58 that literally stopped me in my reading tracks.


There are two quick ways of telling whether a book is English or French. (We shall suppose, for the sake of argument, that you have become so perfectly bilingual that you no longer noticed whether words are French or English.) First, when books are standing upright in a bookcase: if you have to tilt your head to the right to read the wording down the spine, the book is English; if you tilt your head to the left, it is French.


Could this really be true? How hadn't I noticed?


C'est vrai! It's true! It's extraordinary to realise that the language you speak controls so many things even down to the way which you will need to turn your head to read a book spine.

There are so many useful and fascinating nuggets of information in Pardon My French that I'm sure I'll reread it at some stage along my 7 plus year journey towards bilingualism.

What useful tidbits?! VO/VF is news I can use, and so interesting, the spine of the book thing! Who knew? Enjoy your journey toward Bilingualism, keep on keepin' on.

Louise, This is a helpful little book, and you've picked some very intriguing bits to include in your post. Thanks so much for introducing it to us and for playing along with Dreaming of France. Here’s my Dreaming of France meme

This book sounds quite interesting. It makes me wonder what we are missing or misinterpreting.

I need to add this one to my wish list. Thanks for sharing it, Louise.

Sim I knew you'd love the VO/VF- it's certainly expanded my horizons and I do hope to put it to use one day.

Paulita - there were lots of knew and interesting things I learnt in this book, and when you've read as many books on Paris as we have, that isn't always an easy thing to do.

Esme- I'm sure, indeed certain that I miss/misunderstand so much.

Deb- he has a number of similar books I believe. I've found another one since about touring France in a row boat- yes I bought it.

One of my colleagues always trumps us with his arcane knowledge of books, publishing & obscure titbits - I'm going to save this one for him!!

Sounds like an excellent book full of useful info. I wrote a blog post about finding films in English (VO/VF) and it has been one of most popular ones ever. The thing about which way French books print their titles has always irritated my sense of orderliness as I have French and English books on my book shelves and I don't like that they're all jumbled! Thanks for linking this to #AllAboutFrance

I too have this book and not only is it interesting and informative, I find it amusing too! Fascinated about the titles on the spines of books - is it only the French that have it this way round. They do like to be different, they have the AZERTY keyboard rather than the QWERTY too!