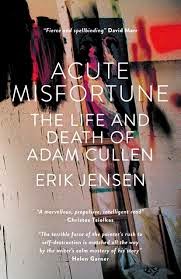 I really don't know what drew me so strongly to read Acute Misfortune. I think I might have read a review in the weekend papers at some stage. Then I accidentally went along to a session with author Erik Jensen at the Newcastle Writers Festival last month. Accidentally, because it wasn't a session that I had planned to see. I was going to have a break, walk around town between other sessions. But then it was showery that day and a bit miserable, so I found an extra session to go to and bought a ticket.

It turned out the Blurred Lines: Biography with a Difference session was fantastic (and maybe I'll get to telling you about it one day). Erik Jensen talking about Acute Misfortune and David Leser talking about his book To Begin to Know. I really enjoyed both authors speak- two journalists who had written two very different books. I was compelled to buy Acute Misfortune even though I felt really strongly that I wouldn't like Adam Cullen, and wondered if I'd like the book.

I don't think I knew all that much about Adam Cullen before this. I don't think that I've known much about his art, even though he won the Archibald Prize in 2000 for his portrait of David Denham. Turns out that I don't really like his artistic style all that much. Do a google image search- it's often rather confronting in a naive style. I did recognise having seen one of his paintings before, I think in the Does Humour Belong in Art? exhibition that I saw last year.

In the Blurred Lines session  at NWF Erik Jensen told us a bit about the book and about Adam Cullen. He told us that Adam had shot him in the leg as a test of his bravery, and also pushed him off a motorbike. I kept wondering if Adam Cullen was just an arsehole and why Erik Jensen would move into Adam Cullen's house to write this biography. Erik was 19 at the time and Adam did lie and say that he had a book deal ready to go for his biography.

Adam Cullen grew up in the suburban heartland of Sydney's Northern Beaches. He had a happy childhood, and had to leave because he couldn't make art there.


Adam's is a funeral of friends who have become acquaintances, spurred back into friendship by death.

Adam's life had contracted hugely in the decade since he moved to the Blue Moutnains, outside Sydney. His last two relationships had broken down. Friends had drifted away as he became more difficult, as the course of his life became more obvious and its conclusion more inevitable.


Adam would have been a very difficult person to know. He enjoyed pushing the boundaries, with his art, his body, his family, his friends. He was an alcoholic, and intravenous drug user, and it ended up consuming him.


In the end, Adam did not need to overdose. Drugs had been working quietly on his body for two decades. At times more loudly. He was weakened by narcotics and made wretched by drink. his organs were ravaged.  He could no longer eat solids. In his bathroom, he kept a collection of hospital bracelets hanging from his mirror, like an adult's baby book, each discharge a strange kind of rebirth. He did not need to overdose; he was already dead.


There were lies and terrible acts. I think the thing that most upset me, apart from random acts of cruelty was his relationship with his mother.


I was fourteen when I stopped loving my mother.


It was a relationship that never recovered. And yet she was to be the only woman that he ever painted.

There is some interesting thought about art at times. Even though Adam didn't like other artists, he resented them, and thought that they "just don't understand what life is about". Art is "making something completely fucking useless" and "a means of checking whether society was still paying attention".

Now having read Acute Misfortune, I'm still not sure. Was Adam just an arsehole? Probably? Maybe? I feel very sure that Adam Cullen and I wouldn't have seen eye to eye on many things. I was pretty much outraged on every page by something Adam Cullen said or did. But Erik Jensen has written a very readable, and rather compelling book about him. There is much food for thought.


An interesting interview of Erik Jensen with
Caroline Baume who asks the burning question,
"Why should we care about Adam Cullen?"

A fabulous interview of Erik Jensen by
Geraldine Doogue

It's hard (almost impossible?) for me to separate the art from the artist. If I know a person is a cruel being, his art is colored for me.

It is hard to do that Deb. Adam Cullen's art is not to my taste anyway, some of it is ok, but most of it I find just weird, and I like a more painterly style that's for sure.

It can be difficult to separate the person from his or her work.