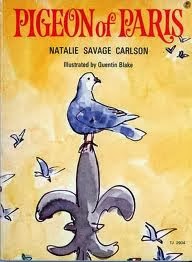 When I saw this book on my recent foray to the Bathurst Lifeline Book Fair I nearly snapped my wrist grabbing at it. Paris. Birds (if only pigeons). Quentin Blake. And all for 50 cents? No brainer. It was mine. No matter that I hadn't heard of it before, I had to buy it, then and there, and then I had to read it rather soon.

Pigeon of Paris is the rather touching story of Evangeline, a spinster pigeon living on Notre Dame. Evangeline is lonely, and looking for a mate, but she runs foul of the pigeon-hating Chief of Police.

'There are too many pigeons in Paris,' he said to the policeman. 'They defile the statues and clutter the parks. There must be a thousand pigeons roosing on Notre Dame alone.'


Even in 1960 pigeons must have been a problem in Paris. I certainly noticed pigeons on my trip to Paris in 2010. Paris is like many cities around the world that have tried to curb their growing pigeon populations.

The story here though was a secondary pleasure for me. I loved this book. It was quaint, by an author new to me, and I learnt so much!

One blustery spring morning, a storm blew in from the west. It blew across the city of Paris, rattling the chimney pots and swaying the Eiffel tower the five inches it may move without falling over.


I hadn't heard that before. But it seems it's true. Amazing to learn that she grows by up to six inches in summer as the metal heats up.

Pigeons drink in a sucking way, unlike that of other birds who must lift their heads with every few drops.

Unmarried women of 25 years were called Catherinettes in France, after Saint Catherine.

I was briefly hopeful that this would be one of Quentin Blake's earliest books. It's not really. He illustrated his first children's book in 1960. Still it's fascinating to see some of his early work.

Natalie Savage Carlson was an American author who lived in Paris for many years. It seems quite a number of her stories were set in Paris. She was nominated for the Hans Christian Anderson Award, and what seems to be her most famous book, The Family Under the Bridge, was a Newbery Honor book in 1959. Yes, that sound is my TBR growing yet again.

What a great post; I'm glad I stopped by! I hadn't really thought about pigeons being pests but they certainly can be, can't they? Your link to the image of the people among the flock of pigeons (flock, is that correct?) reminded me of my favorite photo of my brother and I. I was fourish, he was seven, and I'm cringing trying to hide from all the pigeons flapping about on the ground, in the air, everywhere. We were at one of the other great pigeon paradises in the world - it was back then anyway - Trafalgar Square. Thanks for a great post, and a lovely memory!

Louise, Great post. I loved hearing about this book. I've never thought of pigeons being a problem in Paris. Now Venice, I definitely notice the pigeons there.
Sim, Great story about your Trafalgar Square pigeon encounter. Here’s my Dreaming of France meme

Wonderful book- but don't leave us hanging! Did lonely Evangeline find a mate?

I love some the children's books for their illustrations. I have a very old book of nursery rhymes that has lovely ones and I have always loved it. You certainly have found a lot of books about Paris!

What a great find! How cool that the story introduced us to real facts -- and such interesting ones!

Hi Louise , what a great bargain , and of course you just had to buy it , I would too , even though I cannot stand Pigeons , they are annoying whichever country they are in. A super story though. Thank you for all your wonderful comments on my blog , so happy when I know more and more people are reading it . :-) Anne

Hate pigeons but this sounds like a charming book!

It is a wonderful book. Susan she did find a mate- Gabriel. Like all good romance stories though they become separated, and must overcome adversity to be together.