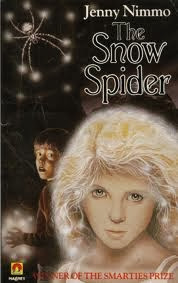 The Snow Spider is a book that I didn't really know anything about before it came up on my 1001 schedule, and somehow the vaguely creepy 80s cover put me off. I'd borrowed it from my library once, but never got to starting to read it. What a pleasant surprise it was to start reading! I was entranced from the very first page.

A beguiling story set in a remote Welsh farmhouse. At the very start of the story Gwyn's rather eccentric grandmother gives him five unusual gifts for his ninth birthday.

They were very unusual gifts and if Gwyn had not been the sort of boy he was, he might have been disappointed.
'Happy Birthday!' said his grandmother, turning her basket upside down.
Gwyn stared at the objects on the kitchen floor, none of them wrapped in bright birthday paper: a piece of seaweed, a yellow scarf, a tin whistle, a twisted metal brooch, and a small, broken horse.


Rather odd presents indeed. But Gwyn's house is not a happy one, and his birthday isn't really celebrated. His sister Bethan disappeared in mysterious circumstances on his birthday four years earlier. So Gwyn's birthday is not so much a day of celebration, but one of mourning and remembrance, as each day seems to be. Particularly for Gwyn's father who blames him for his sister's disappearance.

Jenny Nimmo is English, but has lived for many years in Wales and she incorporates ancient tales of Welsh mythology into a modern story of friendship, family and loss. There was a very strong vibe of A Wrinkle in Time in some parts of the book for me, and even though I didn't particularly like A Wrinkle in Time the first time I read it (shocking I know!, but it does seem to be growing on me), I did really enjoy The Snow Spider, so much so that I've ordered the other two books in the series, Emlyn's Moon and The Chestnut Soldier.