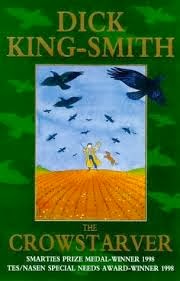 I've read the occasional Dick King-Smith title in the past, but had never heard of this one before it came up on my 1001 reading schedule. Dick King-Smith despite not successfully publishing a book until he was in his 50s, managed to publish over 100 books after that. He is most famous of course for his story of a pig who thinks it's really a dog, best known as Babe- from the movie title, although the book has the somewhat more clunky name of The Sheep-Pig. I find a lot of his book titles a bit clunky actually, The Crowstarver among them I guess. Perhaps it's because you think it should be scarecrow, but it isn't.

The Crowstarver is a sweet, endearing book as it turns out, despite the title. A rather odd story really. A newborn baby is left as a foundling on a remote Wiltshire farm in 1926. The baby boy is taken in by the amiable, poor shepherd and his wife, Tom and Kathie Sparrow, who are sadly childless. They soon realise that their new son has delayed milestones. He is slow to talk, and slow to walk. Indeed he adopts his own style of locomotion so peculiar that he known as Spider Sparrow from then on. (The book is published in America as Spider Sparrow).

Spider has his own skills though. He can mimic animal noises perfectly, and has a great rapport with both farm and wild animals. Spider grows up in a loving home, but it is a quiet existence. His parents try to enrol him at school when he's old enough, but in what was probably quite typical for the time, he was refused school enrolment as the headmaster didn't know how to deal with his particular circumstances.

The first half of the book is really quite slow, not unpleasant at all, but it's hard to say that anything much actually happens. Soon enough though World War II makes it's presence felt even in rural Wiltshire- the young men go off to war, and Spider is given work to do on the farm. This is when he becomes a crowstarver.

Crowstarving's about all he'll be fit for by the look of him, walking up and down banging a sheet of tin with a stick to keep the birds off new-sown corn.


The action picks up after the war starts, and there are some rather moving events, with the cycle of life and death on the farm, and the war. After a German plane is shot down on the farm, several of the farm men race to the scene of the crash, out for revenge and blood.

Percy Pound stared into those blue eyes, and all of a sudden as he did so, he experienced a dramatic change of mood. He found himself forgetting his anger and his hatred for any member of the race that had killed his son, and instead he felt a stab of pity and an enormous sorrow for the madness of mankind.
He lowered the pitchfork.
Oh dear God, he thought, he looks so much like our Henry.


I have a few more King-Smiths to read before I'm grown up, and many more that I could read of course, I'll be looking forward to them.