Road Trip- Turner from the Tate

Recently we took another lovely day trip to Canberra to see the Turner from the Tate exhibition at the National Gallery of Australia.

First we went to the National Portrait Gallery to see the Richard Avedon People exhibition. It was amazing. The first Australian exhibition of his work. On until 24 November 2013, and well worth a look. 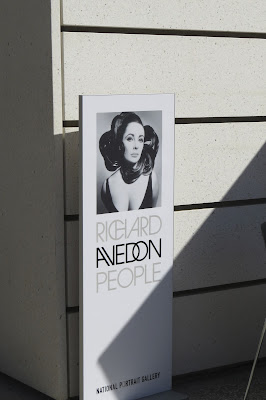 Then we ducked over to the NGA. Turner from the Tate was a really magnificent exhibition (it's sadly finished now). The largest Turner exhibition ever to tour outside Britain. Somewhat uncharacteristically for the NGA you were allowed to take photos inside the exhibition.


It was interesting to see Turner's work progress from his younger days, watercolours and more traditional works through to his later works with glowing atmospheres and radiant light that is more familiar as his style for people like me who don't know all that much about art.

I got the audio tour (always worth it, but this one was particularly fabulous). I learnt so much. The son of a barber, Turner was born in central London. His sister died young, and his mother was committed to an asylum. He had a precocious talent and he drew in spilt milk as a child. His first exhbition was at age 15.

Turner was highly successful in his lifetime, but always very conscious of his reputation. He retained or re-acquired many of his paintings, which he was to bequeath to the British people in his will. The Turner Bequest at the Tate. Turner appeared to have been bettering himself with his dying wishes too, as he asked for his work to be hung with one of his idols Claude Lorrain (who I wasn't familiar with at all) in the National Gallery- a request that is honoured to this day. 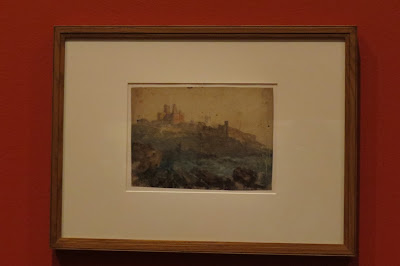 I got the impression that JMW Turner was a prickly personality- there were many references to his competitive nature, his moodiness, that he maintained long friendships despite his awkward and difficult character. Turner was apparently intensely ambitious and competitive. He sought to elevate the role of landscapes by incorporating classical allusions and imitated compositions of the old masters. He deliberately sought royal commissions, as I suppose many have done, and continue to do. 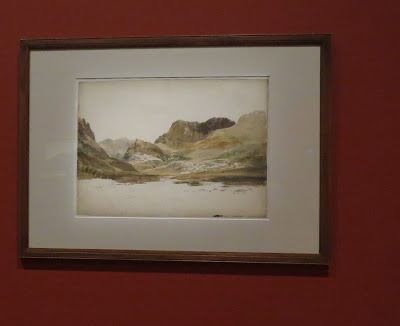 Turner would modify his paintings at the very last minute before they were shown, so that he could add touches of colour at the last minute. He was often experimenting with new techniques and materials, but was notoriously secretive about his methods. From the 1820s his work was often mocked and his methods ridiculed- he was accused of using 'cream, chocolate, yolk of egg, or currant jelly'. The audio tour suggested that his interests lay ahead of the taste at the time, which is a lovely way to put it.

I'm always astonished by the little books for studies that artists take away on tour. In one trip abroad Turner filled 23 sketchbooks in 6 months! 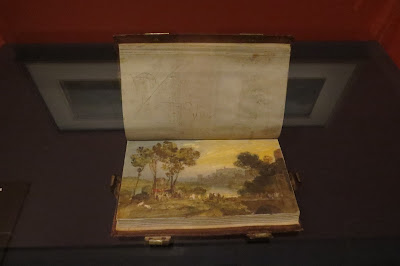 A Disaster at Sea is such a powerful image (even good digital photos don't convey the emotion of the painting, people always say that but I think this was the time that I felt this most profoundly). It depicts a shipwreck off the coast of France in 1833. A British transport ship, the Amphitrite, en route to Australia foundered and sank. The captain apparently refused offers of help from the French because he was only charge with taking the prisoners to Australia and had no authority to let them land in France. So he committed all but three to drown instead. Turner avidly followed the Napoleonic wars, and many of his seascapes were to showcase Britain's naval strength.

I somehow managed to resist all temptation in the well-stocked shop at the end of the exhibition. 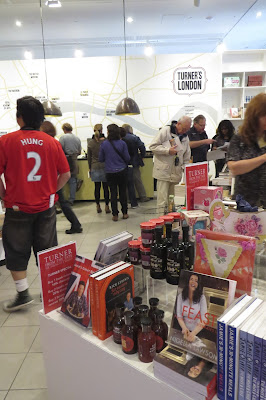 There were all manner of desirable British books and objects. 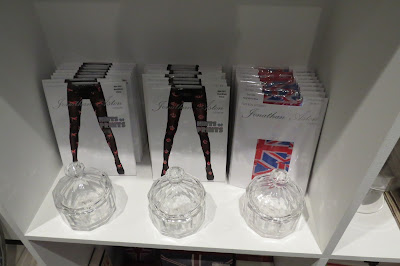 How lovely of you to take your camera and us with you on your day-trip.

Well done for resisting the gift shop - I was not so lucky!!
I came away with a glasses case depicting Sunsetting Over the Lake. All my family and friends think it's a sausage roll sitting on my table :-)