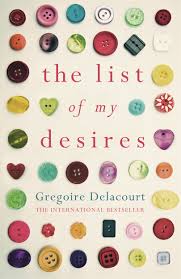 I'd never heard of this book when I first picked it up browsing in a book shop. The cute little hardback with buttons on the cover was strangely attractive. Translated from the French. A bestseller in France, it naturally called to me to read it. But I was strong that day and put it back on the shelf. The very next day I was browsing the August edition of Good Reading Magazine, and there was a review giving it 4.5/5 and telling me this book will "enchant and beguile". Too much serendipity. I had to read it. I went back and bought it.

Gregoire Delacourt is a Parisian advertising executive and a new French novelist. His first book, L'Ecrivain de la Famille won 5 French literary prizes! The List of My Desires is his second book, and has apparently been a "runaway Number One best-seller in France", with rights sold in 27 countries. It is the first of his books to be translated into English.

Jocelyne Guerbette is 47, living a small but apparently happy and comfortable life in Arras, a town in northern France. She is married, with two adult children, she runs a small haberdashery shop and a blog  tengoldfingers about "the pleasures of knitting, embroidery and dressmaking" that has a loyal following. One day Jocelyne get the chance to decide what her life will be like.

I enjoyed the French setting of the book. I haven't been to Arras, but Jocelyne goes to Paris one day, and I have been there....

Oddly enough, even surrounded by cars and horrible scooters, jammed between the Rue de Rivoli and the Quai Voltaire, the particles of air look cleaner and clearer to me.


Just the memory of that place makes me happy. When Jocelyne is shopping on Rue Cambon I practically gasped out loud. I shopped there! Only for icecream at Pierre Herme, but still... I was there. I know where it is. The Paris Tragic in me loves this stuff.

I was annoyed by many little things in this book though, which tempered my enjoyment of place and glimpses into French culture. I wonder unknowable things like if French hairdressers really do pick their Lotto numbers using their ideal weight. Or do married French couples really watch 5 seasons of Grey's Anatomy together? It seems improbable to me. Everyone looks like a European actor who invariably I've never heard of. There are many, many (too many) references to Belle du Seigneur, a 1968 Swiss novel by Albert Cohen that must have an enduring popularity in France, although I see there is a recent English film version, perhaps I will get to see that at some stage. Checking out the book  online I see that it is 992 pages- chance of me reading it = 0%.

I was confused from the outset. Jocelyne also uses words like boring, dreary, uneventful. Is she really all that happy?

My own dreams have fled.


Now that's not a happy woman. Yet she feels she has a "huge, flaming, unique happiness". Her husband said unforgivable things to her when their third child is stillborn, and that makes him stop drinking. But Jocelyne appears to have forgiven him, even though she remembers. Really? Do I really believe this?

But this is inexcusable in any language:


I'd already been working there for two years when the owner swallowd a button as she was biting it to make sure it was genuine ivory. The button went down the wrong way, it slipped over her moist tongue, got into her laryngopharynx, hit a cricothyroid ligament and stuck in her aorta, so Madame Pillard didn't hear herself choking to death.


Aorta? Come on. Does anyone proof read this? Was the mistake in the original French or the English translation?

Still, The List of My Desires is a very quick, enjoyable read even with the flaws. Printed with quite a large font it almost feels like a Large Print book. I read it in under a day, just a few hours really. It's like sneaking a delicious French morsel in amongst my more typical leaves and dust Anglophone reading diet.

Just for a bit of French random advertising fun.

Labels: Books You've Never Heard Of But Just Have to Read, Dreaming of France, In Translation, Paris

Okay, the book is on my list, in spite of your frustrations with it. Who can't enjoy a quick bonbon? And the toilet paper commercial is hilarious. Thanks for playing along. Here’s my Dreaming of France meme

Surely a translation error? I don't think I'll read it!

I live in France but haven't heard of that book but, then, I don't really keep up with French literature. I'll have to have a look.

Even I, who would put science-y things last on my list of Things I Know, realize your button wouldn't go from your mouth to your aorta! Gracious alive.

I think I'll cross this off my list, despite its lovely Frenchiness.