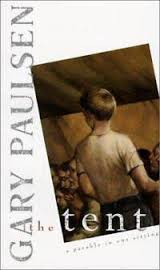 A few years ago I read Gary Paulsen's My Life in Dog Years with my young son. It was an astonishing read. A memoir told via the canine companions that packs a powerful emotional punch. It was too much for a read to a sensitive young child actually, he was in tears at some of it. But I remembered the power of that book, so that when I saw a copy of The Tent on the sale table at my library last year I snapped it up.

I was always a bit daunted to pick this book up, because it is subtitled- A Parable in One Sitting. I often don't have time to read 80 pages at once. But if you put it on the cover it's like an instruction to be obeyed. Today I took the chance to pick it up in honour of this weekends Dewey's 24 Hour Readathon. I've not had the opportunity to participate in a readathon yet- but I do love the concept, so the planets will align one time I'm sure.

The Tent was an interesting read. Fourteen year old Steven is living with his father Corey in reduced circumstances in Texas. Corey had been laid off from his job a few years ago, and his minimum wage job can't pay for their trailer park home. Corey comes up with a money making scheme to become a travelling evangelist touring small town Texas, which comes as a bit of a surprise to Steven.

"God?" Steven stared at his father. In fourteen years Steven had never heard his father mention God- not counting the time he'd slammed his thumb with a framing hammer. They had never been to church, never studied the Bible, never spoken of anything even remotely religious.


Corey fits out an old army tent with some seats and a plywood pulpit and then Corey and Steve set off on their preaching adventure. The Tent wasn't as astonishing as My Life in Dog Years, but it's always difficult to read a second book by an author when the first one was so amazing. But I did read it in one sitting as instructed. I look forward to reading more of Gary Paulsen.
Posted by Louise at 20:24

Gary Paulsen is very, very popular in middle-school here in the US. My sons read Hatchet and loved it when they were that age.

Is that the same as the movie, my Life in Dog Years?
Swedish I think...
Truly wonderful and moving
I must check
Love yr book reviews!
Tanks
Carolg

Ok not the case!

My Life as a Dog is a 1985 Swedish drama film directed by Lasse Hallström. It is based on the second novel of a semi-autobiographical trilogy by Reidar Jönsson. It tells the story of Ingemar, a young boy sent to live with relatives. Wikipedia
Still wondeful