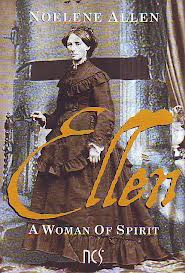 I went to an amazing Author Event recently at my local library. Noelene Allen became interested in the story of the Kelly family after moving to Beechworth in Victoria. Noelene wrote Ellen, A Woman of Spirit to show the effects of the dramatic Kelly story on the women and children of the family, but more particularly on Ellen, Ned Kelly's mother.

Noelene told us the captivating but harrowing tale of Ellen's life. Born in County Antrim in Northern Ireland, Ellen Quinn came to Australia aged 9 with her large family. She was an excellent horsewoman from an early age, but she rode astride, not sidesaddle. She eloped with John "Red" Kelly at 18 after her parents had refused the marriage. John Kelly had been convicted of stealing two pigs in his native Ireland and been transported to Tasmania for 7 years. John was a drinker, and he killed a neighbours cow that had wandered onto their property to feed his large family. He was sent to prison, after his release his drinking increased, and he died of dropsy while still a young man.

John Kelly's death left Ellen a widow at 33 with 7 young children. Ned became the head of the family at around 13 years old. More troubles were to beset Ellen in the next few years. Her drunk brother in law set fire to the house she was living in, leaving her once again homeless. She sued the father of her 8th child for maintenance in 1870, and won, surely a rare occurence. She was arrested for "furious riding in a public place" in celebration.

In 1874 she remarried. Her second husband was a 24 year old American, George King, with whom she was to have three more children. Ellen was 42 when she remarried but noted herself as 36 on her marriage certificate! The real trouble set in when Ellen was arrested for the attempted murder of a police constable, Alexander Fitzpatrick. He had visited the Kelly household to arrest Ned's brother Dan. Fitzpatrick apparently made an unwanted advance towards one of the girls, he left the house with injuries to his arm, and a dented helmet. He claimed that Ellen Kelly hit him with a fire shovel.

Ellen was found guilty and sentenced to 3 years of hard labour at Melbourne Gaol. The same gaol where Ned was later sent, and where he was hung on November 11 1880. Ellen worked in the laundry at the gaol, and chose to work in the laundry that morning even though there was a  window to the gallows from the laundry. Noelene feels that Ellen would have overheard the events in the gallows yard that morning. I don't know how any mother could go through that.

Ned himself blamed the incarceration of his mother (and his half sister) as the start of the family's troubles. Ellen was to have more heartache in later life, she was to outlive 7 of her 12 children, her granddaughter Ellen drowned herself at age 22 overwhelmed with grief at her mother Maggie's death, and another grandson was killed in France in WWWI. Ellen Kelly died aged 91 on 27 March 1923, she was buried in an unmarked grave at Greta cemetary.

It's a remarkable story of a rather remarkable life. Noelene spoke very well, and clearly knows her subject, she held everyone's attention with this incredible tale. I'm sure Ellen would be a great read.
Posted by Louise at 11:49

Such an interesting bit of lost history, isn't it? I am filled with horror at the thought of the gaol scene. And then to live to 91, with so much lost. Terrible.