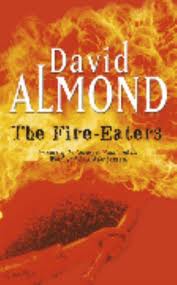 I just love finding great new authors that you've never really heard of before. I started to know of David Almond a year or two ago, but hadn't had a chance to read him before I picked up The Fire-Eaters recently. I often find when the name and the cover of a book don't really appeal, sometimes it's good to read it anyway, even if somewhat begrudgingly, as often it's a great revelation.

The Fire-Eaters is an oddly engaging story written about a summer and autumn in Northern England. It's not just any ordinary late summer though. It's 1962, and everyone is consumed with thoughts and fears of the Cuban Missile Crisis and the ever present threat of nuclear war. I thought David Almond did an amazing job of conveying the uncertainty, fear and despair that the people were going through. They thought that nuclear war was about to start. That really came through in the story. The kids were spooked, the adults were too. Not the usual cheery subjects, or style, of children's literature.


Then I lay in bed and dreamed again and the blankets became chains and my sleep was a great writhing and struggling to break free.


The Fire-Eaters is set in the small coastal community of Keely Bay, near Newcastle. Bobby Burns lives near the beach in a modest house, that is probably run down. The Spink family live nearby. Their mother has died recently and all the children help their father gather sea coal to fund their rather marginal, but reasonably happy existence.  Bobby meets McNulty on page one- a mysterious figure, he is a strong man and fire-eater busking at the market in Newcastle when Bobby visits with his mother one Sunday morning. There is a clear malevolence and history surrounding McNulty.

He was wrapped in chains. He writhed and jerked and struggled on the cobbles.
'Look at him,' she said. 'The poor soul.'


And what of the new boy who has moved in to Keely Bay with his family? Will he be a friend, or another new threat? The children also face more real and immediate dramas at their new high school. The changing weather is also used to represent the changing political climate.

All that sense that things is doomed and all that gathering scariness.


It was ultimately quite a political, yet even a hopeful book. Bobby asks his father:

'Is it always right to protest,' I said, 'even if you think it's hopeless?'


I actually made two starts at reading The Fire-Eaters. The first time I tried it clearly wasn't the right time for me. I made a tentative start, and was a bit put off early on. I only read two chapters then, and there was something of the malevolence of McNulty that reminded me of The Changeover, which I hadn't really liked. So I set it aside while I finished The Coral Island. Happily when I picked up The Fire-Eaters again I fell under David Almond's thrall quite quickly. I really enjoyed his writing. I love his use of the Northern England dialect, all that owt and nowt and bairns. Bobby's family mix jam into their rice pudding! How good does that sound? Definitely something to try this winter. I love rice pudding but had never thought of combining it with jam.

There's a quote from The Sunday Telegraph on the back cover of my library copy:

One of these days, someone is going to notice that David Almond has been kidnapped by children's publishing and demand him back for adults.


That pretty much sums it up for me. I'm looking forward to reading much more of his work. The Fire-Eaters is certainly one that would repay rereading.

Love this author, too. Happy I read this book.