The Wild Parrots of Telegraph Hill 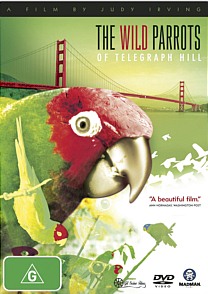 I heard about this movie when it was released in 2005, but I'd never seen it anywhere here, and really had forgotten about it. Until recently when I saw a blog post about a new bird movie The Central Park Effect. I couldn't find it in Australia of course. But I remembered The Wild Parrots of Telegraph Hill and searched that out. It wasn't easy. My library didn't have it. I eventually found it at JBHifi. Except I didn't notice the fine print stating that they weren't sure that they had it either. Thankfully they did and it didn't take all that long to drop into my mail box.

Recently we watched it for my pick for our weekly family movie and pizza night. A Friday night institution at our house. We take it in turns to pick a movie for all of us to watch. We've been doing it for years, and have watched lots of great movies, and a few duds. Tonight it was my turn. So I picked a film about birds, much to the boy's despair.

Mark Bittner was single man living in rather difficult circumstances in Telegraph Hill in San Francisco in the 1990s. He wasn't working, and didn't have much money, but he had time. One day he noticed a small group of exotic parrots, these parrots came to be a big part of his life. Much bigger than he could have ever imagined. Those parrots changed his life.

A beautiful, moving true tale of birds, yes. But so much more. It's exceptionally sad at times. I highly recommend it.

I didn't know it was a movie but I do have a copy of the book here to read sometime. :-)

I saw this documentary a couple of years ago, and also enjoyed it immensely, though the end was ad for the guy

Oh I knew of the book too ... I remember a friend strongly recommending it a couple of years ago. I might never get to the book but the film might be a fair compromise. (Oh, and how I remember the challenge of finding movies for all to enjoy ... roaming up and down the video hire store wasting way too much time.)

Hmmm, didn't know about the movie.

Amazingly I had not heard of this book. Not sure how that happened. However, after reading your post here last week, I was able to hunt down the video so now I can watch the movie.

Thanks again for bring this documentary to my attention. I was able to request a copy of the DVD through my public library. I watched it a few weeks ago loved it, although the part about Connor was very sad and in a way I wish I didn't know about it.

I'm so glad you were able to find this Leslie. It is dreadfully sad in parts, I can understand your feelings about it.