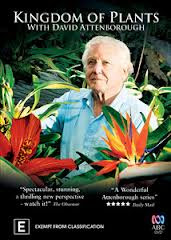 I've just spent an hour each Sunday night for the past three weeks watching David Attenborough's latest project- Kingdom of Plants. And fascinating viewing it is too. Sir David Attenborough is an old man now, 86, his right knee looks dodgy as he walks, but he is still vital and engaging, and passionate about our natural world. This 3 part documentary was filmed at The Royal Botanic Gardens in Kew, where rather astonishingly they have representative plants of 90% of the worlds plant species.

Part One, Life in the Wet Zone, explores the rainforests that cover just 2% of our land surface, but contain 50% of species. Sir David shows us how plants are competitive creatures, every bit as aggressive as animals. Flowering plants developed 140 million years ago and rather quickly became the dominant group. Water lillies were one of the first flowering plants.

There were fascinating images of orchids where the lower part mimics the appearance of a female bee, but the plant also produces a pheromone mimic to the scent of female bees! Ingenious. A particular Madagascan moth has a 30 cm (yes centimetre) tongue necessary to reach inside it's 30cm orchid partner.

Part Three Survival told us that deserts cover a third of the Earth's land surface, and are spreading rapidly. Fascinating to learn that nectar eating bats can eat one and a half times their own weight in nectar a night. I didn't know that some bats migrate- those in Mexcio can migrate 1000km, spreading cactus seeds as they go.

Of course it is all shot with the rather stunning photography that you expect from Sir David Attenborough and the BBC. Fabulous. And there's a great looking ipad app to check out too.

Thanks for this info. I'm always way behind on tv shows though my dad was talking about this too. I looked at one of the clips you posted and it looks brilliant, as I'd expect. I'll have to see if it's on iview.