I love Crested Pigeons (Ocyphaps lophotes). They're a very common bird where I live in rural NSW. Actually they're really quite widespread across Australia. They used to live mainly in central Australia, but this seed eating forager has made great use of farming and urban areas, and they are now found in most areas of mainland Australia. 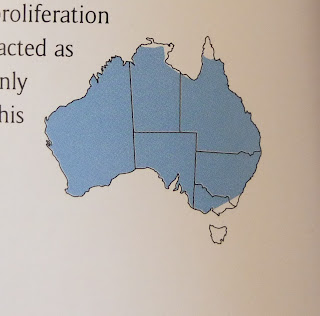 They are great to take pictures of, especially for the novice birdwatcher and photographer. They're quite a large pigeon sized bird, and they are relatively used to people being around, and so aren't skittish. When they do take flight they make quite a commotion, so you can often hear them before you see them. Their wings whistle as they take off (think corduroy jeans rubbing together), because they have modified wing feathers, and so the wind can whistle between their feathers as they take flight, easily alerting bird stalkers to their presence.

Recently I found some in my local Botanic Gardens.

As well as a snazzy mohawk spike they have beautiful colours on their wings if you look carefully. 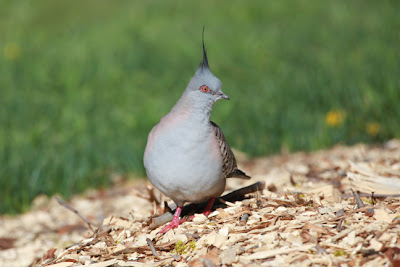 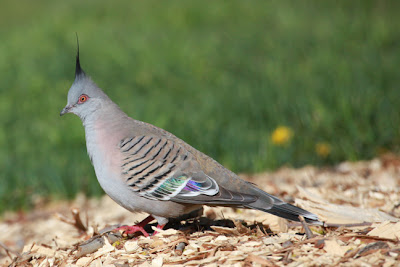 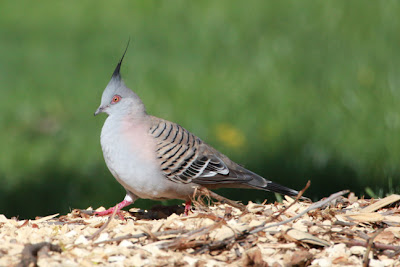 Sometimes one hops up onto a branch in a little spot of sun to perfectly display the beautiful colours in his wings. 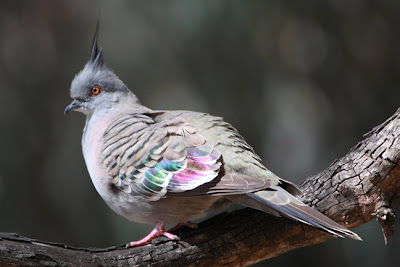 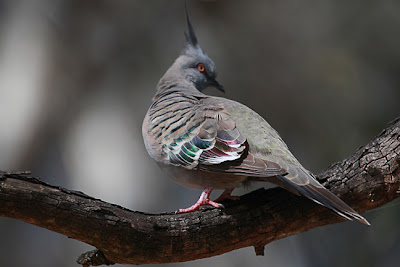 Saturday Snapshot, is a wonderful weekly meme from at home with books
Posted by Louise at 21:54

These birds are so amusing - striding about, looking so upright, and that mohawk spike. I love the colours of their wing feathers

I love the strut, like marching in a parade, and the little spiky feathers.

What a funny bird! They look like something out of a Dr. Seuss book.

I love the first one - they do look like they are strutting their stuff. The colors on the wings are quite pretty.

Love the spikes and the "rainbow" wings...gorgeous! Thanks for sharing.

Those are amazing looking birds!! I love that little spike!

The crested pigeon is such a pretty bird. It has such a self-righteous strut!

Oh wow! Now that's a hairdo! I love the colors on the wings and I feel I just imagine their little strut.

That has to be the prettiest pigeon I've ever seen. Our don't have the fancy mohawk and flashy wing colors.

Those are very pretty! I loved the description of their wings making a sound like corduroy pants!

I've always loved pigeons and where I grew up they were not considered a lovable creature. Maybe if they came crested, more people would be happy to call them beautiful.

Punk rock pigeons - love it! Those are great photos.

How pretty they are!!

The birds are so pretty. Nice job of capturing that.

I love those hairdos. They look like the kind of birds I could be friends with. Hope you get some sunshine soon.