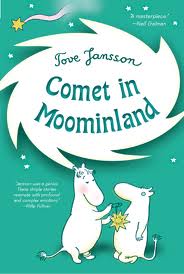 Comet in Moominland is the first in a series of books very famous and popular still in Finland and Europe, but less well known to those of us in the rest of the world. Intriguingly they were written in Swedish, but published in Finland because Tove Jansson was part of the small Swedish-speaking minority population in Finland. In the 1940s and 50s she created the Moomins- gentle, white hippopotamus-like creatures. Moomins even inspired their own theme park in Finland, Moomin World.

I was thrilled to get to finally read this book. I've been hearing more and more about these books in the past few years, and the suspense was killing me. In the end I enjoyed meeting these famous characters, more than I enjoyed the book I think.

Moomintroll learns that a comet may be heading towards the peaceful valley where the Moomins live in their blue house. Moomintroll and Sniff set out to visit the Professors in the Observatory on the Lonely Mountains to find out more about comets and whether or not their peaceful existence is under threat. The "scientists made thousands of remarkable observations, smoked thousands of cigarettes, and lived alone with the stars." It was certainly another time.

I've never been a big one for quest story, where "the action" is a seemingly endless journey across unknown country, and the things that happen along the way.

I particularly enjoyed the philosopher Muskrat though:

I should just like to point out that your bridge-building activities have completely ruined my house in the river bank, and although ultimately it doesn't matter what happens, I must say even a philosopher does not care for being soaked to the skin.


Thank you, but I was just thinking how dangerous it is to load yourself up with belongings.

And I did enjoy the gentle writing, and the occasional nuanced humour.

There are hardly any unnecessary things, I think. Only eating porridge, and washing....

I loved that she used words like titivating in a book clearly written for reasonably young children. I loved that the Moomins played poker, and ate pancakes rather incessantly. So while I wasn't bowled over by my first Moomin experience I am willing to give them another go, after all Neil Gaiman is quoted on the cover proclaiming it "a masterpiece". That alone is worth a second look.

Love the porridge comment, and, as an irritable bowel sufferer who has been told that she must eat the infernal stuff, I coudln't agree more!

These books seem to be practically unknown around here but I've read about them on blogs and after reading The Summer Story I do feel I should explore more of Jansson's writing.

That's such a shame Kath- I love porridge, I make it at home and will even order it in cafes.

Susan- I want to read The Summer Story- indeed I will at some stage as it's in my 1001 that I'm reading. Did you like it?