Wondrous Words Wednesday is a fabulous weekly meme hosted by Bermuda Onion, where we share new (to us) words that we’ve encountered in our weekly reading.
This weeks words are from Comet in Moominland.
1. Tarn (Noun)
A little farther down they came to a tarn, which had sunk so low in its stone basin that the sides were too steep for them to get down and have a swim.
i) A small mountain lake, especially one formed by glaciers. The Free Dictionary.
2. Titivating (Verb)
But as she was titivating herself, a horrifying picture came into the looking-glass.
i) To smarten up (oneself or another), as by making up, doing the hair etc
ii) To make decorative additions to, to spruce up. The Free Dictionary.
Why are all the Google images of Pamela Anderson?

3. Cowslip (Noun)
"Oh, we celebrated my escape with minnows and cowslip wine for many hours," answered Snufkin.
Primula veris. A flowering plant native throughout most of temperate Europe and Asia. The common name cowslip derives from the Old English cūslyppe meaning "cow dung", probably because the plant was often found growing amongst the manure in cow pastures. (Wiki) Nice. Despite this, cowslip leaves and flowers have culinary uses in many countries, including using the flowers to flavour wine. And indeed good old Google tells me that the ladies of Cranford busy themselves making cowslip wine.
The alternative name of palsywort caught my attention, and now The Free Dictionary tells me - A perennial herb, the flowers and roots of which contain flavonoids, glycosides, and saponins; it is analgesic, antispasmodic, diuretic, expectorant, laxative, and sedative. (not exactly what you look for in a wine) It has been used internally for arthritis, headache, insomnia, measles, paralysis, respiratory tract infections, and restlessness, and topically for sunburns. 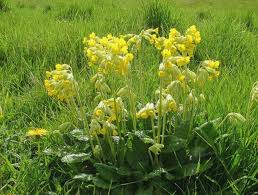 I knew 'cowslip' but had never been brave enough to find out 'titivating' and 'tarn' - you're edjuh-muh-cating me!

I saw a tarn when we lived in France, but never knew what it was called!

I like all your words and pictures this week. Titivating is new to me, but it's similar/close to the word titillate. Well, maybe the connection is just in my head.

Interesting pictures and words, I've heard of cowslip before the others are new to me.

Very intesting words, Louise and the photos helped me a lot. I like cowslips. We named them too "coucou" in France. I'm looking forward them, because when they appear, Spring is here.

Like Margot, I thought of titillate. That's a gorgeous tarn -- and now I know what to call it!
Joy's Book Blog

Kath- I'm edju-mah-cating me too!

Kathy- how wonderful to have lived in France! I wish I could say that.

Margot and Joy- I initially read it as titillate when I was reading the book! I thought it a really odd word to use in my initial confusion. So you're not alone. It's a great word though, I hope I remember it.

TBM- perhaps cowslip is more commonly used in America, as most seem to have known it?

Annie- thanks so much for the French word, it's always interesting to learn more.