Tintin in the Land of the Soviets 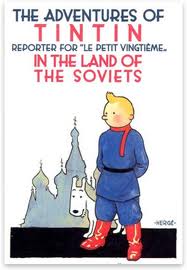 I remember trying to read Tintin as a kid, borrowing a couple of books from the library one time, but I never really got into it. I don't think I ever read a whole book. I remember the covers of course, they're rather iconic. Except I didn't know this one. Tintin in the Land of the Soviets is the first Tintin book, and was published way back in 1929. The upcoming Tintin movie was the impetus that finally got me over the line and reading a Tintin book. Except now I have to read 4! Tintin in the Land of the Soviets is the Tintin title that is included in 1001 Children's Books You Must Read Before You Grow Up. The movie is based on three of the other titles- The Crab with the Golden Claws, The Secret of the Unicorn and Red Rackham's Treasure. I'm hoping to read those before heading off to see the movie after Christmas.

I don't think Herge liked this book. It is the only one of his books that he did not redraw in a colour edition, and Wiki quotes him as saying "I didn't consider it real work... just a game", and he later described it as a "transgression of my youth". This disdain is quite obvious, the artwork and drawing is rough and crude, showing an apparent lack of care compared to the precision and detail of his other works. 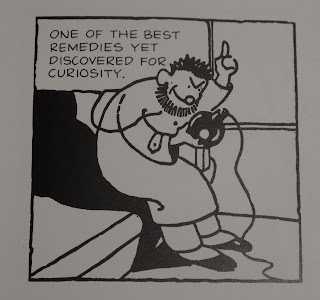 Herge had even prevented the books publication until 1973, with the English translation not appearing until 1989. Interesting to note that it was originally published in serial form over 18 months 1929-1930, much like Dickens had 70 years before. Of course this was a common way of story publishing, and still remains so for cartoons of course, but I'd always thought of Tintin in book format. Reading through I noticed that Herge signed at the end of every double page, so I presume that that is how it was originally published.

It's rather extraordinary to think that it was written as anti-Marxist and anti-Socialist propaganda for children. I don't know many children who get to read anti-Socialist cartoons these days. I wonder if Ben 10 deals with this stuff? Although I suppose most media is biased to some extent, and we all fall prey to propaganda. Wiki tells us that Herge wrote Tintin in the Land of the Soviets based on a single pamphlet published in 1928, and that he did not research Russia independently. This apparently lead to a number of factual errors. LIke guards eating bananas. He likes to have a hack at their food supplies and elections. 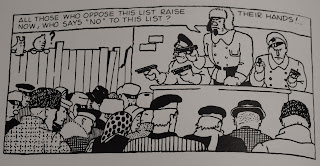 There are some jokes 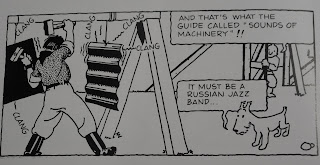 And of course several references to vodka. 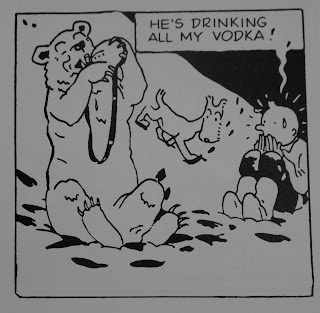 I found Tintin in the Land of the Soviets to be interesting to read for an historical perspective, but I hope some of the other stories will be intriguing in their own right.

I wonder why this one was chosen as the Tintin for 1001 Children's Books?

I don't know. It's hard to understand picking the least regarded, least popular title of an immensely popular series isn't it? Yes it's the first. But they are all stand alone books. It doesn't make a whole lot of sense.

Never read any Tintin - even as a child it seemed very old-fashioned. I vaguely wonder how the Spielberg movie is doing at the box office or has it sunk without a trace?