Paris Not For Parents! 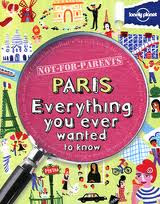 I'm moderately obsessed with Paris. Ok, quite obsessed. So I was immediately drawn to this book. Let's face it I bought it for me, not for Master Strong Belief. He's not really interested in reading it. Even though he is an especially lucky child who ventured to Paris at the tender age of 9. He gave me a shrug and a meh when I asked if he was interested in reading it. Maybe before the next trip he'll be more interested. Sadly it's a fair way off at this stage. So I had to get my Paris fix somehow. And this is a great little book. Sure, it's written for kids, but it's a great format and I still managed to learn stuff, as I generally do with Junior Non Fiction.

All the major stuff is covered. The Louvre. The Eiffel Tower, but it includes cool pictures taken during the construction. The Pompidou Centre. Notre Dame. Le Tour de France.

Place de la Concorde was the site for many of the beheadings in France. It is thought that up to 40,000 people met their grisly end there. The book of course includes a section on the Guillotine -named after Dr Joseph-Ignace Guillotin, who apparently hated that the beheading machine (actually invented by Antoine Louis) was named after him, and indeed Guillotin was actively campaigning for a more humane method of capital punishment. Before 1792 beheading was only bestowed on the rich and powerful, and this typically done with an axe or sword, and wasn't always quickly effective. The poorer citizens of Paris were more commonly hung.


The more obvious kid-centric topics are interesting too. Asterix the Gaul (who I don't think I've ever read), who is still very popular in France, and has his own theme park, Parc Asterix. Dogs in Paris. Kid friendly food- crepes, baguettes, Galette des Rois (which I am quite desperate to try on a winter visit), and of course the gross stuff like snails, frog legs, and stinky cheeses.

I enjoyed learning about the British art collector Richard Wallace who donated 100 public drinking fountains to Paris in the 19th century. His famous Wallace fountains are still there, and still operational, and although I must have walked past many, I don't remember actually noticing them. They will definitely be on the must find list for next time. 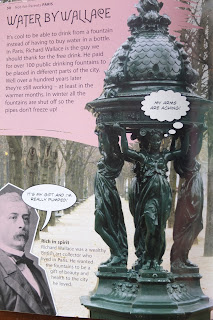 I also enjoyed learning about the siege of Paris. I don't think I'd known that Paris was under siege by Prussia in 1870. Times were desperate and the Parisians ate 70,000 pets and zoo animals including two elephants named Castor and Pollux.

It's always great to make a sudden realisation about a familiar object or substance. I don't think that I had ever thought about the origin of the term Plaster of Paris, even though it's something I deal with most days at work. Plaster of Paris is a mix of water and a powdered rock (gypsum) that was common in the hills of Paris. 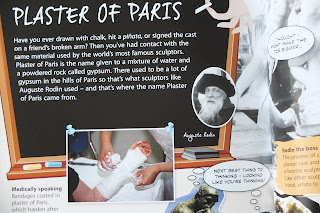 There are 4 titles in this fun series from Lonely Planet - Paris of course, New York, London and Rome.
Posted by Louise at 18:09

I saw this book somewhere and thought it looked like fun but I would wait to see what someone else had to say about it. Now I may need to give it a second look. Thanks!

Yep, we've been living THREE HOURS FROM PARIS BY TRAIN for six months now and still not gone there. Yet. Waiting for springtime....

Wish I could figure out a way to visit Paris more often than once in a lifetime. Sigh. Until I do, I suppose I shall have to continue to find books like these to tide me over.

Satia- I hope you enjoy it.

Kath! Say it's not so.... I can imagine why you're waiting for the spring, although you'll miss out on the gallette des rois!

Deb- Surely it can't be a once in a lifetime experience? I'm always plotting and scheming about the next visit. Probably 2013 at this stage. Hopefully sooner, if I ever win the lottery.

We lived in France when our son was small and Asterix was extremely popular. It's interesting to see he's still popular. We're hoping to go back to Paris in March.

I really found the difference in toys and books that were popular in Paris to be fascinating. Smurfs. Elmer. Nicholas. The Little Prince. Asterix of course. A completely different childhood of fascination. I hope you get back to Paris as planned. I'm always hoping to get back. Sadly I think it will be 2013, not 2012. But it will still be amazing whenever I get there.

I just saw this book at WH Smith this weekI must go back and get !
Merci Carolg and Bear

I hope you'll enjoy it Carol.