The Ibis that ate Sydney

I lived in Sydney for nearly 10 years in the late 80s and 90s. I don't think I remember any ibis then. They're certainly there now- and they do appear to be taking over. The Australian White Ibis is an intriguing looking bird.

They were everywhere on my recent trip to Sydney

They seem to like to take in the major tourist sites

Most of the time there was only one or two 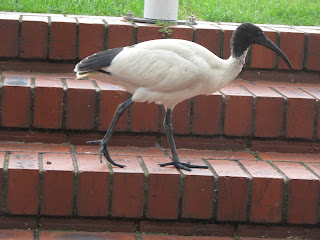 But sometimes there were heaps 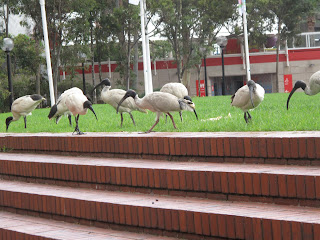 I've since found out that there is an Australian White Ibis Survey. I've now made a small contribution towards it, and have forwarded my (accidental) photos of banded birds.
Saturday Snapshot, is a wonderful weekly meme from at home with books
Posted by Louise at 06:54

Gorgeous and rather endearing. Bless 'em for selecting such a decent place to live!

...wonder if any of them have taken the ferry to Manly or across to see some distant rellies at Taronga?

They are rather strange looking, but I do think large birds are fascinating. I wouldn't have seen the ones in the tree had you not pointed them out.

I stayed once in a hotel in Sidney called Ibis Hotel. I read about the bird, ibis, in The Dovekeepers.
Now I see it/them in your photos.
One writer said that her father gave her one advice: Learn one thing every day.
I like the photos.

These birds are lovely Louise.

They're marching around like they own the place lol.

Wonderful photos of wonderful birds...Really enjoyed looking at them!

They do have the perfect beak for scratching :)

Great photos! They look like they're everywhere. That's some beak.

Enjoyed your Ibis Tour. Interesting looking bird. I hope they are friendly and not too messy, they do seem to be everywhere, kind of like our geese.

I'm a bit scared of them to be honest. They become rather pushy if you're eating around them and quite intimidating.

We stopped for a picnic once in Queens Park in Healesville. There were so many of them that we gave up and left.

I remember entering a drawing competition (huh!) for the Gould League of Bird Lovers and I drew a straw necked ibis. It was quite exotic and rare then!