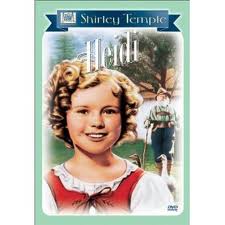 Every Friday night we have a movie and pizza night as a family. It's a lovely tradition that we've been doing for a year or two. Of course it doesn't happen every week, but whenever we're all home it's on. This week was our first chance in ages, and it was my turn to pick. I'd been wanting to watch Heidi since I read the book earlier in the year. Tonight I had my chance, I passed up the endless stream of Dr Who, modern animated features and dinosaur movies that seem to fill our agenda, and picked Heidi.

I guess I had seen a Shirley Temple movie when I was a kid, but don't remember if I saw this particular one. It's astounding to realise that she made over 40 movies. This was certainly the first of her movies that I remember seeing as an adult. She was rather impossibly cute with those ringlets and dimples.

The quality of my DVD copy was rather poor, but it was still enjoyable. The movie followed the book reasonably closely on the whole. The major elements of the story are there at least. Heidi is taken to live with her grumpy, hermit grandfather who she has never met. They make a life in his simple, isolated Alpine cabin. I was actually hoping for more Alpine scenery. I'm not convinced that any of it was filmed in the Alps actually. Certainly we don't get to enjoy Heidi's idyllic time on the Alpine meadows with Peter and the goats as I hoped we would.

There is only really one song and dance sequence, this is slipped in as Grandfather is reading Heidi a story and she imagines herself dancing around as a little Dutch girl in wooden clogs. After the story moves to Frankfurt the plot diverges quite a bit from that of the book. It's all wrapped up at Christmas, a few months earlier than in the book. There must have been a fashion in the 1930s for horse carriage chases, as we have another one here, similar to the 1940 Pride and Prejudice.

Much to my surprise, after some initial grumblings from the boys about the lack of dinosaurs, aliens and disruptions to the space time continuum, we did all rather enjoy Heidi. Perhaps I'll try to slip some more old movies in to our schedule....
Posted by Louise at 00:36

Labels: Movie Made Before I Was Born

I've never seen a Shirley Temple movie, but this one sounds like fun.

That's a lovely family tradition. It's so hard to get our family together all at once anymore-- and my daughter is not a movie watcher. We made it about half-way through Pride and Prejudice about a month ago, but then it was bedtime. The rest of the movie is still waiting to be watched.

Kathy, I imagine many of her movies may be almost interchangeable to the non-enthusiast, but it was certainly pleasant, and worth a look if you're in the mood for something light.

It is a lovely family tradition Susan, we all really enjoy it. I haven't been game to spring P&P on the boys!