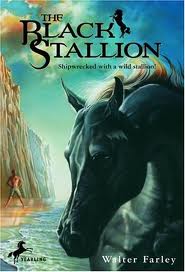 First let me say how much I hate the cover of my copy. It's too much like an airbrushed velvet painting for my tastes. Sadly it was illustration free too. I wish I was able to read an earlier edition that presumably had the illustrations. Even if it is a tad dated, it has olde shoppe charm. And now I find a reprint of the 1941 edition is still available. Damnation.

A famous book, and deservedly so. Walter Farley began writing The Black Stallion when he himself was still in high school. It was published when he was a 26 year old college student, and he had an instant hit on his hands. It has remained popular, and is still in print 70 years later! Farley went on to write 34 books in total, including 21 Black Stallion titles.
The Black Stallion begins in India. An American school boy, Alec Ramsay, has just spent the summer in India with his missionary uncle. He travelled out with friends of his father, but is making his journey home alone. It's never specified just how old Alec is, but I think it's remarkable that the school boy is allowed to travel alone by ship for the better part of a month. Can you imagine parents letting their children do that these days? Not likely. We hover over them too much, worrying over the least detail of their lives. No helicopter parenting for young Alec.
Every chapter is fairly short, 10-12 pages, and punchy. Something big happens in every chapter, just to keep the pages turning. The cover proclaims "Shipwrecked with a wild stallion!", but the shipwreck action is all over in the first 4 chapters! The major part of the story is the friendship, love and bond between Alec and the Black. (This is probably really stupid as an objection but I really didn't like it that the horse was simply referred to as "the Black". I found it weird that Alec never really named him.)
Still it's a rollicking tale, and quite the page turner. I really enjoyed it, even though my horsey phase is long over. It feels wholesome just reading it. 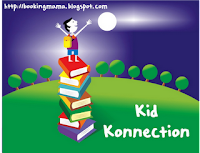 Kid Konnection is a weekly childrens book feature at Booking Mama
Posted by Louise at 08:09

I was never into horses, so missed this book as a child. I should probably go back and read it now.

Oooh,I need to read that - Black Beauty was my favourite growing up and I wasn't even a 'horsey' gal.