Perhaps I'm shallow, superficial or just plain dumb, (or maybe all three, after all they're not mutually exclusive) but I find reading children's non-fiction fulfilling. It is much more likely to give an overview of a topic in simple language that anyone can understand. Sure if I want to read an adult tome of 700 pages on concrete cancer or bonsai techniques I COULD do that. But I'm never going to. It's not going to be interesting. Ever. But the books for kids have picked out the most interesting bits to make them appealing to the worlds toughest readers- kids.  So it's made to be fun. And I will always learn stuff.

Recently I was trawling the library shelves for some books to help my son with a school assignment, and I stumbled on this little gem. 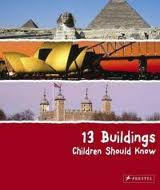 Beautifully presented in lovely hardback this book begs to be picked up. So I did. And took it home. I figured that I'd try to interest my son in it, but that it was mainly for me to check out.

It turns out that this is one of a series of books about 13 things children should now (and adults too if they were smart). Published by Prestel, an imprint of Harper Collins, they publish in English and German, and specialise in art, architecture, photography and design books. And it shows.

I'm not sure why they chose to focus on 13 buildings, a baker's dozen I guess. It could have been 10, 20 or 23 I suppose. But they have to pick some number and so 13 it is. And an interesting 13 it is. Contentious of course. I'm sure we all have our favourite buildings around the world, and if your favourite isn't here, it's a tad upsetting. The 13 are

A reasonably predictable selection perhaps, but one designed to cover the last 4,500 years of world architecture and construction. I think I'd change the Guggenheim to the one in Bilbao, Spain, which is a much more astonishing building than the one in New York.

Some amazing facts that I learnt from this book.
1. The pyramids used to have a smooth white limestone casing, but this has been stolen over time. I can't imagine how amazing they would look smooth and white.

2. That the beautiful and graceful arches at the base of the Eiffel Tower had to be added after the tower was finished, to make the tower prettier.

I was actually most interested in The Leaning Tower of Pisa. It was  built over nearly 200 years. It started tilting during the construction of the third level in 1170. The locals were so frightened that they left it alone for 100 years! Then nearly 100 years later they decided to construct a belfry. And that's a word we don't use often enough these days-belfry.
Posted by Louise at 20:35