I have always loved the nightly ritual of reading to my young son. It has been an ongoing pleasure for both of us, and not one either of us is ready to give up yet, even though he is 10 1/2 now. We don't get to read every night, as he will want to watch tv shows some evenings, and my work roster interferes quite frequently. But I try to read to him a few nights a week at least.

Recently the selections for bed-time reading have taken a somewhat unexpected turn. For months I had been plodding through Series 1 of Emily Rodda's Deltora Quest with him. We have finished book 6 of 8, which coincidentally is how far he got when he read them by himself. It takes quite an effort to get through 8 books that are essentially the same. Although a few years ago I did read ALL 21 of Enid Blyton's Famous Five books out loud. And I still haven't received my nomination for mother of the year!


We left behind the seemingly endless battles with fearsome monsters in the seemingly endless Deltora Quest, and turned towards...... Princesses and Girl's Diaries? It all started with this book, which my son has read, and I have not. The librarian at his new school shows the children all the new books that the library has acquired. For some reason this book captured his imagination, he borrowed it immediately, and read it on his own over the next 7-10 days. Rather unusual behaviour for him, he doesn't often read on his own, but is starting to recently. 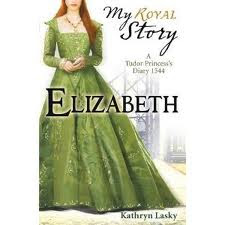 He then went on to search out other books in this series, and the companion My Story series. Thus we have just read Titanic. An Edwardian Girl's Diary 1912.

I have been somewhat bemused by my son's fascination with this series of books. I've read and enjoyed some of the Australian series, My Australian Story before, but had not read any of these. I remember quite an engrossing account of the Spanish Flu of 1918-9 affecting a family in Melbourne read in this way. Perhaps it's the diary format that intrigues him? Needless, I was very interested to read this book with him.

Titanic is the story of Margaret Anne Brady, a fictional oprhaned girl of Irish extraction who has been put in a London orphanage for girls by her brother, her only surviving family member, when he could no longer look after her. Somehow Margaret Anne is selected to be the travelling companion for Mrs Carstairs, a rich American who is returning to America on board the very real Titanic on her maiden voyage.

The book has a rather formal feel to the writing, which is I guess representative of the time, but seems a bit stilted to read at times. I think it must be very difficult to get the tone and voice of a child narrator, especially one born a 100 years or so before our time. Thirteen year old Margaret Anne borrows Henry James, Ralph Waldo Emerson and Emily Dickinson from the Titanic library, and comments on the prostitutes in church when Sister Catherine takes her to Easter Mass before leaving London!

Mrs Carstairs and I took tea in the Cafe Parisien, instead of the lounge. The atmosphere is much less formal than the dining saloon, and we had a harmonious time. There is a light, airy feel to the room, complemented by numerous plants and wicker chairs.

The vocabulary is interesting, and certainly there are many words my son asks the meaning of. Words that seem rather common-place to an adult reader- rivet, vicariously, petticoat, but which make you realise how a modern 10 year old has had no need for them until now.

These books seem more clearly aimed at girls, but somehow they have a very strong pull for my Dr Who obsessed 10 year old son. Actually I think Dr Who has something to do with some of his selections at least. Of the books that he's most keen to read- Titanic, Pompeii, Cleopatra, most have been featured in the new series of Dr Who. And he's certainly curious about anything Dr Who related. Of course as long as he keep reading I'm quite happy to read to him.

Indeed, I was very interested in the historical features of the book. There is some quite detailed historical information and photos at the end of the book. Of course I knew the Titanic sank in 1912 on her maiden voyage. I did not know that it was her Captain's last planned voyage before retirement, but of course he went down with his ship. I did not know that so many people died because there were only lifeboats for about 1,100 people, but that there were approximately 2,200 people on board (and this was more than they were required to have by law at the time! It seems astonishing with hindsight). Even so, many of the lifeboats were lowered only partially filled. And even knowing that the Titanic set sail with five grand pianos, a marmalade machine (?), and 12 cases of ostrich feathers is not enough to make me seek out the movie version of Titanic, which I proudly have not seen.

I just had to google marmalade machines!
Posted by Louise at 23:29

I would have (and probably still would) loved these books as a kid, as I was seriously into Real Life (ish) stories of people growing up in the past (or even now). I had my American Girls series, which followed fictional girls from different periods in America's history, the Little House books, etc...

Mostly, though, I love that you still read to your son. I have such happy, happy memories of mum reading to me growing up :)

Thanks Hannah. I love that I still get to read to him too. And it doesn't show any sign of stopping! YAY. We both still love it. Although it appears it's going to be back to Deltora Quest :-(

It does sound like you would have loved these stories. It will be interesting to read some other ones- I did sneak Marie Antoinette in for me.

Sapphire LOVES those 'my story' books - I think that history really appeals to a lot of kids and when we allowed her to watch the Titanic movie a few weeks ago ..... well...

she was awed. Cried her eyes out and then read up MORE history on the event. Your son might also like the Horrible History series that Sapph churns through at an amazing rate.

I find the appeal of these books quite intriguing Kath. Certainly, it's a big thing for some kids. The Horrible Histories series is a good idea. I've meant to try them with him a few times, but have never got around to it. Must get around to it one of these days.