The whole English Royal wedding media circus was quite interesting. I'm not the most avid royal watcher it must be said. I enjoy the folly at times. But am generally amazed at what an anachronism a monarchy is in the 21st century. Still it was a modern-day spectacle. Big royal weddings don't come around all that often. The last one being Princess Diana's back in 1981. 1981. Try to think back. Neville Wran was Premier of New South Wales. Ronald Regan became president of America. Francois Mitterand became President of France. Metallica formed in LA and Bucks Fizz won Eurovision with Making Your Mind Up.

Thankfully it was a long, long time ago. No wait, that was another song entirely.

And so it was that I got a few friends round and made us some lovely English party food, whilst we settled in to watch the wedding on the big screen. To get the first glimpse of Kate's dress, and become amazed at the ever increasing sillyness of the hats. And they certainly got very silly. And apparently Philip Treacy's couture hats can cost up to 5,000 pounds! 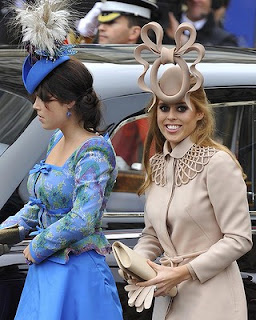 I thought long and hard about our menu for the evening. In the end I decided to have 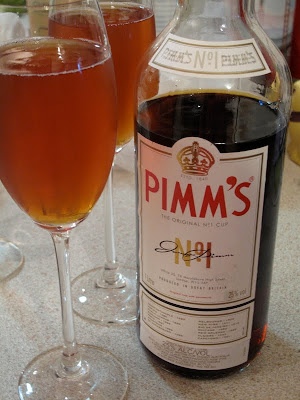 I'd never had Pimms before, and wasn't expecting to like it as people had said it was a bit like gin- sadly I can't abide gin. But if you put a slug in the bottom of a glass of bubbly it's quite drinkeable. I wouldn't give up a Kir Royale all that often in favour, but it worked splendidly on the night.

I was vaguely anxious about making cucumber sandwiches. Not sure why. Surely you just whack some cucumber on some bread and cut the crusts off? I had a nagging suspicion that there was more involved, but had never actually had a cucumber sandwich in real life.  Thank God for those helpful folks at The Australian Women's Weekly! As I was idly flipping through the latest issue, I noticed with some amusement that they had a feature suggesting what to eat for a Royal Wedding Supper- and they included a recipe for cucumber sandwiches! YAY. Salvation.

They used a herbed butter which seemed a clever idea, although I was talking to a friend who had eaten cucumber sandwiches at high tea at fancy London hotels and said that they used a delicious brown bread, and a cream cheese spread. Hmm. After much searching I discovered that there is no decent brown bread available in my patch of small town Australia. So back to white. But cream cheese, that we can do. And I could make it low GI!

Combine the cream cheese, chives, mint and mustard in a small bowl.

Spread one slice of bread with the cream cheese mixture. Top with cucumber. Season with salt and freshly ground pepper. Top with another bread slice. Trim the crusts from the sandwiches and cut into triangles.

There appear to be a zillion recipes for Coronation Chicken on the internet. I used this one. It was lovely but didn't photograph all that well in my hands. The lemon posset was so good that it needs a post for it's very own, so you'll just have to wait til another day......
Posted by Louise at 00:44

Royal Wedding Celebrations were low key here in Shanghai....a few hundred Brits and various hangers-on interested in an excuse for daylight hours drinking at O'malley's pub, and 800 students at the British International School having a proper sit-down 'street party' with cucumber sndwiches and everything, on every TV channel, in every newspaper........nobody took any notice really.....!!

Well done you! I watched the wedding while eating a rinsed can of chickpeas... nto very English. I like the sound of the nibbly things! :P

Hah! We arrived home from Singapore in time to attend a W&K party arranged by some friends.

We brought along the cucumber and smoked salmon sandwiches (crusts removed) and enjoyed several Pimms fruit cups, chips, cold chicken salad, trifle and William's biscuit cake. It was a great excuse to have fun.

The Spouse watched it (I kid you not) but I played Civilization on the computer instead. And nuked the French, (which is always satisfying given the nuclear testing program in our Aussie backyard).

Fiona, which Brits weren't interested in daytime drinking? It was Friday evening here, and so perfectly timed for silliness.

Hannah, say that's not your typical Friday evening fare! At least they were rinsed.

Kath- it was a great excuse to have fun, no matter how interested or not you were in the actual wedding. I'll have to try some Pimm's in other circumstances I think, a Pimm's fruit cup sounds interesting.

Lisa- you snuck a glimpse occasionally though didn't you? Just to check out some of the more controversial outfits...

I love the sound of your cucumber sandwiches. I'll have to try them. I also look forward to the lemon posset. I have a lot a lemons and I'm looking for ways to use them.

Margot, I'm sure you'd enjoy the cucumber sandwiches. They really were delicious. I don't think I'll wait for the next royal wedding to enjoy them again. The lemon posset was delicious too- I must catch up with some posts.