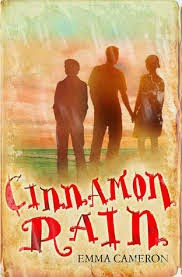 Sometimes you don't remember how you heard about a particular book, sometimes you do.  I first heard about Cinnamon Rain when I read Brona's review back in 2012. Sadly, I don't think I've seen it blogged anywhere since, although Buzzfeed did recently include it in their list of 27 Awesome Australian Books Every YA Fan Should Read. But I remembered it, and was keen to read it still, and recently I picked up a copy at my library.

Cinnamon Rain is an excellent novel, that just happens to be in verse. I'm so glad that Steven Herrick taught me to read verse novels last year. It has really opened up the format for me. Previously I would have rejected it simply because it was a verse novel. Now, I'm becoming bolder, reading verse novels by different authors- and really enjoying them. I don't think that there's been one that I haven't liked so far.

Cinnamon Rain tells the story of six friends as they traverse the last 2-3 years of high school. The story is of the six friends, but told in the voice of just three- Luke, Casey and Bongo. The six are growing up in the fictitious Australian coastal town of Pebble Beach. These kids are facing much bigger problems than I ever have. Domestic violence, drug abuse, first loves, family breakdown and homelessness all whilst trying to finish up at school and work out what to do with their lives.


The he goes off
to buy some leaf
so he can get bombed.
I used to think
the reason he doped up
was to stop himself sinking
in all the pain.
Now,
I think that clouding the pain
is what's making him sink.

Emma Cameron has done a great job capturing this often difficult transitional time in the life of our young people. Their school life, family circumstances and friends all impact on the direction they take and whether they succeed or not. As a parent reading Cinnamon Rain it's often so painful watching several terrible parents set up their children to fail. Perhaps some of them don't do it intentionally, but it seems some of them do. The adults don't come out of things too well actually- of course some of them are normal parents, working and doing their best by their family, but others are making terrible choices that are played out on their children's lives.

Cinnamon Rain is published as Out of This Place overseas. Rather incredibly Cinnamon Rain was Emma Cameron's debut novel, it was a CBCA Notable Book for Older Readers 2013. I hope it continues to be read far into the future.

I'm so glad you finally got to this one.
Like you I've really embraced the verse novel now.

Thanks for the shout out too :-)