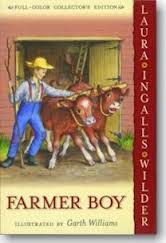 Sad to say I never read any of Laura Ingalls Wilder's books in my childhood. I was a child of the 70s and do remember loving the TV show, and watched it avidly each week. But I've become increasingly aware since then of how some people just adore these books- they seem to make grown women swoon. So, I was interested to sample her books recently for the first time.

Farmer Boy isn't strictly one of the Little House on the Prairie books I guess. It is a rather biographical account of a young boy, Almanzo Wilder, a boy who Laura Ingalls will grow up to marry.

I was really pleasantly surprised at how much I liked Farmer Boy from the beginning. I liked the language and the writing from the very first page.


It was January in northern New York State, sixty-seven years ago. Snow lay deep everywhere. It loaded the bare limbs of oaks and maples and beeches, it bent the green boughs of cedars and spruces down into the drifts. Billows of snow covered the fields and the stone fences.

There are lots of fascinating historical details of course. Farming practices, and how they eked out their existence is all rather astonishing. The Wilder family are clearly a bit well off- they have lots of barns and animals. Almanzo's father is well respected locally- a man of good standing in the community. The family seems to have more than enough to eat- the larder is well stocked, and the children go to school with a good lunch. When they do go to school- there is much work to be done on a farm when it is all largely done by hand and the children are all required to help out with farm work for much of the year. It is only really in the cold, quiet winter months that they get to attend school regularly, and not surprisingly they don't enjoy it all that much.

I found the insights into their foods especially fascinating.


Their work, their life, and their food is intensely seasonal. Something many people are returning back to only now. They forage beech nuts in the autumn, and harvest and preserve, even the cobbler visits are seasonal. Although I am glad that we don't have to have butchering time any more. I was rather surprised at the presence of popcorn. I guess I'd never thought about where popcorn originated.

Popcorn is American. Nobody but the Indians ever had popcorn, til after the Pilgrim Fathers came to America. On the first Thanksgiving Day, the Indians were invited to dinner, and they came, and they poured out on the table a big bagful of popcorn. The Pilgrim Fathers didn't know what it was. The Pilgrim Mothers didn't know, either. The Indians had popped it, but it probably wasn't very good. Probably they didn't butter it or salt it, and it would be cold and tough after they had carried it around in a bag of skins.


Not only do we have hot popcorn now, we also have rather different attitudes to corporal punishment.

"If the teacher has to thrash you again, Royal, I'll give you a thrashing you'll remember."


I did wonder about Almanzo as a name. It seems odd that the boys of the pioneer farming family are Almanzo and Royal while their sisters have the more traditional monikers of Eliza Jane and Alice. I'm not sure what that means really but it's rather interesting to ponder. Almanzo is apparently an anglicisation of an Arabic name.

I read a couple Little House books when I was young, but I read the whole series with my daughter when she was young. I love them all. I think The Long Winter is my favorite, but they are all good.

Oh I am a real lover of these books both from my childhood & reading them later to my daughter. Please don't skip around, start at the beginning Little House In The Big Woods & read each one. They are a remarkable account of life in those times.

I liked this book very much, too. I never read it as a child; back then I avoided books with a male protagonist.

I only read these books as an adult too. I think the seasonal descriptions bored me as a child and I stuck to the more accessible tv series !!
Thankfully our reading tastes mature :-)