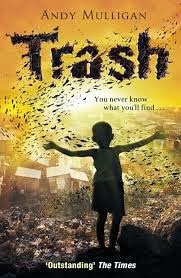 What a surprise this book turned out to be for me. I'd heard good things about it when it was published back in 2010. I nearly bought it. But I thought of the many, many books that sat in my house unread and I resisted.

Then this year Master Wicker was assigned Trash in his Year 8 English class at school. They are doing  a topic on Troubled Times in class. The first book they read was John Marsden's Letters from the Inside (see my review), and now this has been coupled with Trash. For weeks I have heard nothing but moaning about this book. Master Wicker didn't like it from the outset. He was moaning about having to read it. Moaning about how much he didn't like it. Moaning that he had finally read it (after much parental goading) and now has to write an essay.

So a few days ago I cautiously opened the covers and started. And I loved it from the start. An extraordinary setting, quite unlike any other children's book that I've read. The three main characters, Raphael, Gardo and Rat eke out their existence scavenging through the rubbish of an unnamed city (but rather clearly based on Manila). It's far from glamorous.


People say to me, 'I guess you just never know what you'll find, sifting through rubbish! Today could be your lucky day.' I say to them, 'Friend, I think I know what I find.' And I know what everyone finds, because I know what we've been finding for all the years I've been working, which is eleven years. It's the one word: stuppa, which means- and I'm sorry if I offend- it's our word for human muck. I don't want to upset anyone, that's not my business here. But there's a lot of things hard to come by inout sweet city, and of the things too many people don't have is toilets and running water. So when they have to go, they do it where they can. Most of those people live in boxes, and the boxes are stacked up tall and high. So, when you use the toilet, you do it on a piece of paper, and you wrap it up and put it in the trash.

The boys live out their lives at the dump where they work. Trash is a story of poverty, corruption, power and brutality. But it's also a page turning thriller. Very early on Raphael does find something. A small bag with a wallet, a map and a key. There's a sum of money- a bonanza for Raphael and his aunt, but a modest amount really. But then the police come searching for the bag. This simple find is clearly more important than it would seem.

This was the next book that I picked up after Emil and the Detectives, and there are some quite surprising parallels with Emil really. Again we have boys working together, without the help of the police to solve a mystery and catch a criminal. It was funny to see the echoes of suburban 1920's Berlin in the slums of modern day Manila.

Trash created some controversy because of the subject matter, and it is realistically violent at times. Trash had initially been selected for the Blue Peter Book Award shortlist in 2011, but it was deemed unsuitable and soon dropped.

Andy Mulligan grew up in London, and has spent quite a bit of time in Manila. He had been a theatre director for 10 years when circumstances conspired to send him to India.


I was out of work. Mrs Thatcher, bless her, was closing the country down, so I was making nothing.


After his experiences in India Andy Mulligan was inspired to become a teacher, and he has now taught English and Drama in Britain, India, Brazil and the Philippines. Trash grew out of him meeting street-children and visiting the dumpsites. The location is non-specific so that it is not seen as an attack on one country, but a more universal story of child-exploitation and corruption, which is indeed a widespread problem still in our world.

There is a movie of Trash due out later this year. No trailers seem to be available as yet. Interesting to see Richard Curtis has done the screenplay (he of Notting Hill, Love Actually and Four Weddings and Funeral fame). It was filmed in Rio where they created a "safe and healthy dump" for the filming. Martin Sheen plays Father Juilliard. The other actors named are new to me. I'll be watching out for it.
Posted by Louise at 22:16