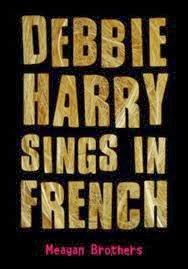 I was absolutely powerless to resist this book when I saw the title browsing the library shelves. Debbie Harry. French. No matter that I'd never heard of the book, or the author, I had to bring it home. I didn't bother with reading the blurb, it didn't matter what it was about- the title had me. And then I just had to squeeze in time to read it. Happily that happened this week.

Johnny is 12 when we meet him, living in Tampa, Florida in the early 90s with his parents- his ex-hippie mum, and businessman dad who is often away on business trips. As with many of us his teenage years are defined by music. Johnny is introduced to "British spider music" by his babysitter. The Cure, Bauhaus, Joy Division, New Order, the Sisters of Mercy, the Damned, Siouxsie and the Banshees. Ahh, good times.

Johnny's father dies very early in the book, his mum falls apart, and he has to grow up too soon. He goes through a bit of a goth phase, (although I have to say that I'd never thought of goths in Florida) and starts drinking too much.

I guess you can figure out why I started drinking. I didn't do it just to get wasted, like some kids, or to impress anyone. I kept it to myself. I was stressed, and, on top of it all, I was afraid somebody would find out how bad a shape my mom was in and send me to an orphanage or a foster home. I couldn't talk to anybody; I couldn't ask for help. But I could raid the liquor cabinet…


Johnny at 16 ends up in rehab briefly were he discovers Blondie after one song on the radio.


The English version is good,
but the French has a certain je ne sais quoi
Does "got the blues" not translate?

And he is transfixed.

Listening to Debbie Harry sing the French part of "sunday Girl" was somehow more reassuring than anything the counsellors had told me so far.


Soon after he is sent to live with his uncle and cousin in South Carolina.

South Carolina was disgusting. It pissed rain. Rain so heavy and dark it seemed black. The trees were so wet they looked black too. And the trees were everywhere- not the palm trees I was used to, but big, hulking, leafy things, all crowded together. No tall buildings, no beaches. Just a crummy little strip mall of a town and all these trees. I felt like I was lost in the woods.


Most of the story is then in South Carolina as Johnny makes his way in a new state, a new school, finding new friends. Finding his way in the world with his teenage soundtrack, yet another "orphan" tale. And it is about more than the transformative abilities of music, although music features heavily as it does for pretty much every teenager.

I enjoyed my time with Johnny and his world. I've read a smattering of modern YA books and I find that they always make me wonder if everyone is so troubled, if most people have lives like this. I guess the kids with the more boring, traditional families and lives don't make for an interesting story, as pretty much nothing would happen.
Posted by Louise at 11:16