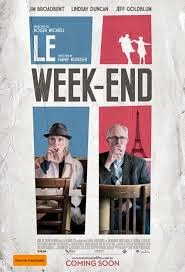 I knew that I would go see this movie when I saw the poster in the Coming Soon list at my local cinema. Clearly it was set in Paris, and that was enough for me. I didn't really bother to find out anything much else about it.  I saw the trailer once, and was mildly concerned that it might be depressing. Before I went I did find out that it was about an English couple going to Paris to celebrate their 30th wedding anniversary.

That English couple is Nick and Meg Burrows, (Jim Broadbent and Lindsay Duncan) he is a philosophy lecturer and she a teacher. They spent their honeymoon in Paris, and have travelled there again to rekindle the magic that Paris can impart. However they are a particularly unlikeable pair. Meg's character seems inconsistent, I never understood her, and I never got to like either of them. Reading reviews online it seems a particularly divisive film- many people love it, and find it profound- and there are some profound moments, some humorous moments, but not enough for me.

Paris was majestic of course. From the opening scenes on the Eurostar heading to Paris I was continually oohing, and going oh, I've been there. Meg was even reading Elegance of the Hedgehog, which I took with me last year but didn't get to read as there too much holidaying to be done. Although sadly I have never stayed in a suite at the Plaza Athenee, I have been to Musee Rodin, the Arc de Triomphe and the Rue de Rivoli. On my trip last year we too climbed the steps of Montmartre and looked out on Paris from Sacre Coeur. I can fully understand Meg asking "Who would want to live anywhere else?"

I did enjoy the lesson in French film history embedded within Le Week-End. There was a classic dance from a  film referenced several times, but I didn't know what it was. It's a fairly easy Google to discover that it is a famous dance scene from Luc Goddard's Bande à part (Band of Outsiders), which they apparently referred to as the Madison scene, even though it isn't the Madison.

This scene apparently influenced Uma Thurman and John Travolta's dance in Pulp Fiction. Having just watched both of these dances again I can't say that I get how. I had long thought that the dance that Australians do to the Nutbush was referred to as the Madison, but I know see that it is merely a variation of the Madison. Which all goes to explain how Brad can ask "Say, do any of you guys know how to Madison?" in The Rocky Horror Picture Show. Which is really quite a long way from Le Week-End I suppose. I'm glad to have seen Le Week-End and would probably watch it again when it came on the tele, but it isn't my favourite Paris movie.

I am always up for anything Paris-ish. Even bad books. Even bad movies. Thanks for sharing your thoughts. Sorry it was a disappointment.

It seems many other people really liked it Deb- you might be one of them...

Sounds interesting but your review does not make me want to go see it. Maybe if its on TV. Glad to know about it though, thanks for sharing your impressions.

This sounds like a good movie to watch on DVD when it comes out. We get a kick out of Paris scenes now that we've been there.

I definitely want to see this, even though you weren't wowed by it. I loved the dance scene, although, was it only me who thought the dance didn't always go with the music? I've got to send this to my daughter. She'll enjoy it. Thanks for playing along today. Here’s my Dreaming of France meme