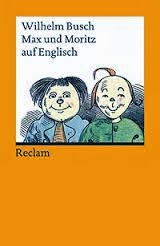 I've been interested in books in translation for some time, and this has been gaining momentum lately, with my recent reading of Found in Translation. While I have a major interest in, and a small knowledge of the French speaking world, I really don't know much about Germany or the German language- my only memory from dabbling in German at uni when I was younger is "Ich habe hunger" (at least that may come in handy one day), and is better than the standout French phrase from my uni days "J'aime les haricot verts".

Max and Moritz was first published in 1865 and is apparently iconic in the German speaking world. Wiki tells us so- so it must be true.

Busch's classic tale of the terrible duo (now in the public domain) has since become a proud part of the culture in German-speaking countries. Even today, parents usually read these tales to their not-yet-literate children. To this day in Germany, Austria, and Switzerland, a certain familiarity with the story and its rhymes is still presumed, as it is often referenced in mass communication. The two leering faces are synonymous with mischief, and appear almost logo-like in advertising and even graffiti.


It's amazing how much we may not know of our own English speaking world, but I find it really intriguing to discover things that may be much more commonplace in other cultures. If you search the internet hard enough you can find Max and Moritz restaurants, statues, beer, dolls, stamps, costume masks and many other items.

The naughty pair were even immortalised in the 1979 German Postcard at Eurovision.

Max and Moritz is "a tale of two scamps in seven pranks". They are extremely naughty boys who terrorise the adult inhabitants by killing chickens, putting gunpowder in their meerschaum pipes or bugs in their beds, stealing and many other types of mischievousness. They do ultimately get their comeuppance in a rather gruesome and macabre way. It is all told in cute rhyming couplets with rather extraordinary English that can't have been original, but works a treat.

Bang! The meerschaum pipe goes off
Loud like a Kalashnikov!

Max and Moritz was the inspiration for the first newspaper comic strip, The Katzenjammer Kids, and this early influence and legacy is recognised with the Max and Moritz Prize for the best comic published in Germany. It only takes about 15 minutes to read, and is available online, mostly in German, but sometimes in English too.

I was certainly not aware of Wilhelm Busch's fame either. Apparently he was one of Germany's great poets alongside Goethe and Schiller (shhh, I haven't heard of Schiller either). Busch has his own museum in Hanover, which seems to be currently conducting manga workshops!