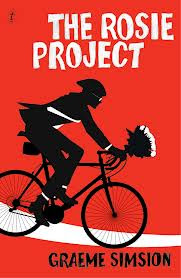 I'd been keen to read this for some time. The Rosie Project seems to have been the book of 2012 in the way that The Slap was the book of 2009. It seems everyone else has read it already. Whispering Gums read it. ANZ Lit Lovers read it. I was keen to read it, and had bought it and set it aside for my plane reading to get me to Europe. And it was a perfect choice for that.

The Rosie Project is the story of Don Tillman, a great character, and wonderfully eccentric first person narrator. Don is a tenured genetics professor at a university in Melbourne. He decides to create The Wife Project to select the perfect wife. He attacks the project in typical Don style.

A questionnaire! Such an obvious solution. A purpose built, scientifically valid instrument incorporating current best practice to filter out the time wasters, the visual-harassment complainers, the crystal gazers, the horoscope readers, the fashion obsessives, the religious fanatics, the vegans, the sports watchers, the creationists, the smokers, the scientifically illiterate, the homeopaths, leaving, ideally, the perfect partner, or, realistically, a manageable shortlist of candidates.

Don creates a slim-line 16 page document to aid in his quest.

This gentle, funny book is a delightful read. It does have the occasional deeper thought though, it's not just airport book fluff.

Why do we focus on certain things at the expense of others? We will risk our lives to save a person from drowning, yet not make a donation that could save dozens of children from starvation. We install solar panels when their impact on CO2 emissions is minimal- and indeed may have a net negative effect if manufacturing and installation are taken into account- rather than contributing to more efficient infrastructure projects.


The Rosie Project has an interesting heritage, starting life as a screenplay before winning the Victorian Premier's Literary Award for an Unpublished Manuscript in 2012. You can author Graeme Simsion talk at considerable length in this RN interview.

Update Jan 2014- Graeme Simsion is working on a sequel to The Rosie Project, it is to be published in Australia in 2014.

Good plane read choice Louise ... hope it was an e-version? Any, glad you enjoyed it, and thanks for the link! What's your next book?

No it was a paper version, but I left it in Amsterdam with my Australian friend there- I'd planned to do that, I thought she'd enjoy it. I'm meant to be reading Elegance of the Hedgehog or Les Miserables, but not really getting any reading done with all the holiday activities.

I've also heard all the buzz around this book and have it on my TBR pile. I saw Simsion talk at the Sydney Writers Festival too. It pushed the book higher up my list, but the classics club stuff is priority right now :-)

Enjoy the rest of your trip...I'm hoping you found time for some Sat Snapshot pics today????

Interesting book! Looks like it hasn't been released in the US yet, but I'll keep an eye out for it. The description almost reminded me of "How to Create the Perfect Wife," a book I read recently, but your protagonist sounds much more engaging than the awful man who had trouble finding a wife in the book I read.

Enjoyed this book...certainly not what I expected, but entertaining and very well written. This would make a great movie -- hope one is in the works!
For more info on Sandy Robinson Maid Service San Antonio