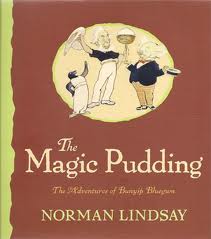 It's always tough approaching a classic. You've heard of it, know things of it, but don't know it yet. I feel keen to read it- finally. Will I like it? I always feel somewhat pressured to like it. What does it say about me if I don't? I felt all these conflicting emotions approaching The Magic Pudding. Voted last year as number 7 of the 10 Aussie Books to Read Before You Die. Oh right. No pressure then.

Happily, I really enjoyed The Magic Pudding. Norman Lindsay's classic tale depicts the adventures of Bunyip Bluegum an affable young koala who lives with his whiskery, curmudgeonly old Uncle Wattleberry. Bunyip Bluegum has to eat his meals outside their small tree house to avoid whisker soup, but Uncle Wattleberry refuses to have his whiskers trimmed. So Bunyip sets off to see the world, in quite a dapper fashion, taking his Uncle's walking-stick, and "assuming an air of pleasure" starts off on his journey.

He found a great many things to see, such as dandelions, and ants, and traction engines, and bolting horses, and furniture being removed, besides being kept busy raising his hat, and passing the time of day with people on the road, for he was a very well-bred young fellow, polite in his manners, graceful in his attitudes, and able to converse on a great variety of subjects, having read all the best Australian poets.

Bunyip Bluegum soon meets up with Bill Barnacle, the sailor, and his friend, Sam Sawnoff, the penguin bold. They are "in the very act of having lunch", which of course consists of the rare talking cut-an'-come-again pudding Albert. Of course Magic Puddings are highly desirable objects and professional pudding thieves abound. A simple tale, very well told in four slices with many verse inclusions, The Magic Pudding is well deserving of it's classic status.

Initially I had to get over my surprise that the Magic Pudding was a steak and kidney pudding and not a Christmas pudding, which I'd always assumed it was. I guess steak and kidney puddings were more desirable in 1918 than they are now. Norman Lindsay famously set about writing The Magic Pudding as a bet. He had a debate with Bertram Stevens, the editor of Art and Australia who believed that children ultimately preferred stories about fairies. Lindsay disagreed and thought that "food was far more interesting for children."

My 90th anniversary edition has wonderful bonus material at the back. Fascinating reviews of the first edition which often focused on the price, a guinea, "a stiff price for a desirable book primarily intended for youngsters". A biography by Helen Glad, Norman Lindsay's granddaughter. One section is rightly titled A Creative Life. Norman Lindsay certainly did have a creative life- author- his fiction work included "thirteen light-hearted novels about the absurdity of the human race, as well as numerous other titles", artist, sculptor, illustrator, model ship maker. Norman Lindsay had so many creative pursuits that he was to never own a television or even a radio in his lifetime. There are even a few recipes at the very end of the book- steak and kidney pudding of course, apple dumplings and the enchantingly named plum duff.


Letters included in the back of my copy show that Norman Lindsay wasn't always proud of his achievement. In a 1918 letter Lindsay writes

Your request re the lady who wants to recite the Pudding embarrasses me. That sort of thing is the last sort of notoriety I care for. I wouldn't mind if the damned stuff was worth reciting but of course, if it was worth reciting, no one would want to recite it. The truth is, I'm not at all proud of having produced this little bundle of piffle, and regret very much that I did so. However, it's done now and can't be helped. I wouldn't have minded if it had come out as a kids' book, to be sold at a price that would allow the kid to tear it with a clear conscience, but to have it produced at a quid, while my serious work is produced at 12 bob seems to upset any serious effort to put a proper value on anything.

Norman Lindsay used a wonderful vocabulary not often found in more modern children's books- firmament, unmitigated ruffian, malefactors and  verisimilitude. He has a rather liberal use of neologisms as well, words such as bungfoodlin' that made me think of Roald Dahl's delicious use of wordy fun.

Our synchronicity does make me wonder sometimes Louise.
I was at the Norman Lindsay Gallery the first weekend in May. But my phone was out of charge so I could take no photos!
Instead I enjoyed a cuppa at the café, took a little walk through the bush and finished the last chapter of the book I was reading on a ledge overlooking the valley :-)
PS My dad still loves a good steak and kidney pie to this day!

This book is one of my favourite childhood memories! Right up there with Blinky Bill!